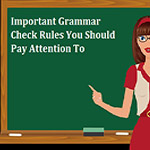 This post describes seven general but important areas of English grammar and composition that writers must know to write perfectly.

According to this rule, singular verbs are used for singular subjects and plural verbs are for plural subjects. The verb should be according to the subject, not with an overriding clause or phrase. “The box of oranges is on the table.”

If reflexive pronouns, -self and compound of a pronoun are related to a predecessor pronoun, then they would be correct, e.g. “He did it himself.”; “Call Rahim or themself.” It is not correct because the reflexive pronoun is not referred to any previous pronoun.

In-line lists, the phrase, and clauses presented within the composition of a sentence should be grammatically consistent. The parallel structure involves the repetition of the same grammatical form when the items are listed or compared. For example, in the sentence “Intuitions are not adaptive, actionable and help in achieving the preferred objectives.” It is constructed incorrectly because “are” assists the first adjective and help is related with achieve, but adaptive can share “are” with actionable only if these are separated with conjunction instead of a comma. “Intuitions are not adaptive and actionable and help in achieving the preferred objectives.”

In another sentence that has to remain in the listed form, each element that is listed must follow parallelism, such as in the alteration of “Taylor always condemns public schools because they are government-funded, compulsory and normalizing.” to “Taylor always condemns because they receive money from government, require students attendance and abolishes student’s humanity.” When items are compared in a list, they should have a parallel structure.