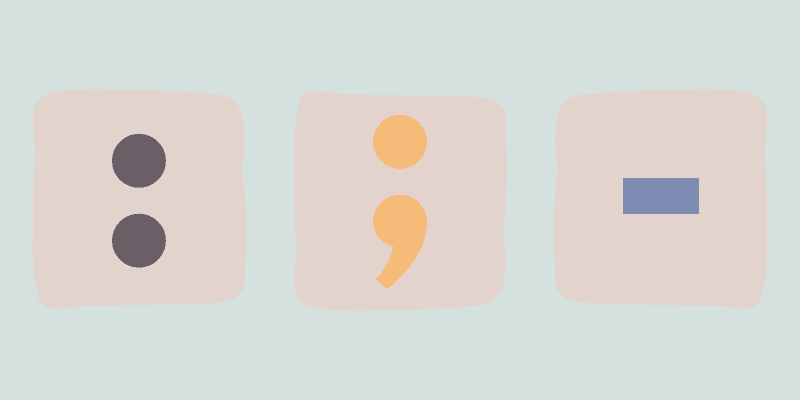 Three punctuation marks with similar functions include the colon, semicolon, and em dash. We use these symbols to separate a part of a sentence to communicate a clearer message.

This article shows the difference between a colon vs. semicolon vs. dash in terms of usage. We’ll also study some examples of how to use them in sentences.

When your writing shows proper grammar and punctuation, it will be much easier to persuade your audience. Businesses will attract more customers and sell their products. In the same way, book writers will make their readers hooked to the story.

What is a Colon Used For?

A colon (:) is a punctuation mark used for an introductory phrase in the English language. Colons introduce information in the original sentence, then provide context.

This usage for a colon is uncommon. You don’t always see writers use this punctuation mark to make a clause independent. However, this rule is essential to avoid a comma splice.

A comma splice is a comma mistake that uses commas to combine main clauses. Later, you’ll learn that the American semicolon usage has a similar purpose.

You can spot a colon in different kinds of writing, such as in a formal business letter, creative writing, and academic writing. You can see the colons in business letters after the introductory statements, such as “To whom it may concern:”

Use a colon to express units of time, titles, bibliography entries for specific citation styles, and ratios. Here are some examples of colons in sentences:

One common error regarding colon use is adding it after phrases like “including” and “such as” in a sentence. Here’s an example of incorrect use of a colon in action:

How Do I Capitalize After a Colon?

One of the many colon errors you’ll encounter is the improper capitalization of the word or phrase after. This is not a matter of choice or preference.

Capitalize the first letter of the first word if it begins with a new sentence. You must also use the capital letter for a proper noun or acronym.

However, if you use British English, you should only use a capital letter for acronyms and proper nouns.

What is a Semicolon Used For?

Semicolons or semi-colons (;) also have confusing punctuation rules because their use has declined over the previous century. Its primary function is to divide clauses within a sentence. Here’s an example of how to use a semicolon in a sentence:

You can also use a comma instead of a semicolon to divide a main clause from a subordinate clause.

Think of semicolons as alternatives to conjunctions. In the example above, we can replace the semicolon with “because.”

Aside from separating clauses in an independent sentence, semicolons have another purpose in writing. You can separate items in a list that already has commas or internal punctuations, also known as complex series.

For example, we can put the following items together in a sentence using semicolons:

Use semicolons instead of commas with compound sentences so you can separate lengthy phrases.

The use of semicolons is confusing but meaningful. Take it from Cecilia Watson, who said:

A semicolon is where our anxieties and aspirations about language, class, and education are concentrated, so those big ideas are distilled down to a few winking drops of ink in this small mark.

The primary use of a colon is to introduce or emphasize phrases or statements. Meanwhile, semicolons join two independent clauses.

Colons and semicolons are used in lists in different ways. Put a colon following a complete sentence when showing a list of items. Make sure there are no words like “such as,” “that is,” or “namely” before the colon.

Do not use a semicolon before introducing a list. Instead, you should use it to separate lengthy items in a list.

What is a Dash Used For?

A dash is a horizontal line that represents different things in a sentence. There are two types of dashes you must know: the en dash and the em dash.

The en dash (–) is shorter than the em dash but longer than a hyphen (-). Its primary function is to replace the word “to” for scores or ranges.

If the sentence contains words like “from… to…” and “between… and…,” you should not put an en dash.

Many people commit the accidental usage of a single hyphen rather than an en dash. Remember that an en dash, which looks like a double hyphen, is for ranges in numbers and dates. A hyphen, which resembles a single dash, is for compound words.

The em-dash (—) isn’t new to the world of punctuation. Emily Dickinson, a 19th-century poet, enjoyed using them. However, 20th-century authors rarely used it because of its complexities.

You can use an em-dash to separate a non-restrictive clause or bonus phrases. Non-restrictive or non-essential clauses are not vital to the sentence’s meaning.

Here, the sentence structure is similar to using commas, non-restrictive clauses, and a parenthetical phrase. Below is an example of how we can use a comma and parentheses as substitutes:

One incorrect usage of the dash is when they are used as hyphens. Do not use an en dash and em dash for compound words and word forms of numbers.

The dash and colon rules are different from one another. But we use both em dash, colon, and comma for emphasis in a statement or to make a noun, noun phrase, or appositive clearer.

Can a Dash be Used as a Colon?

The dash can be used as a colon despite their difference in some functions. When emphasizing a noun or a noun phrase, dash and colon are clear-cut choices depending on the style guidelines.

Can a Dash Replace a Semicolon?

An em dash can replace a semicolon when combining two independent clauses.

Is a Hyphen a Dash?

A hyphen is similar to a dash but has a different function. It joins words to form compound words like “twenty-two” or “party-goer.” Avoid using a hanging hyphen or including a space between hyphens, such as “twenty- two” or “party – goer.”

Examples of a Colon in Sentences

Examples of a Semicolon in Sentences

Examples of a Dash in Sentences

These examples show the usage of the en dash in sentences.

Here are some examples of the em dash in sentences.

Colon vs. Semicolon vs. Dash in a Nutshell

Now you should understand the difference between a colon, semicolon, and em dash and how to use them. Remember to:

Always follow the punctuation rules in formal writing to make your work clearer and more readable.