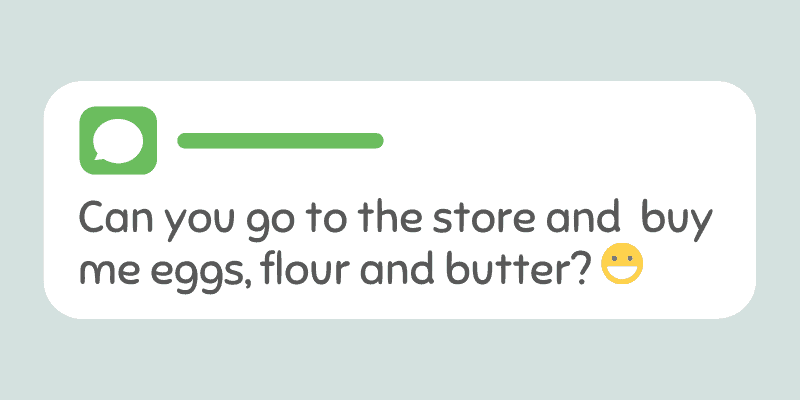 The comma is the most common punctuation mark in writing but is also the most misused. Commas are used in various ways to help combine sentences, introduce information, and offset details, but they are most notably used to separate list items to avoid confusion.

When explaining commas to my students, I like to start with how they are used in lists since their placement is easy to see and understand. Separating items the students have already recognized as different makes it easier for them to know why they belong where they do.

What is a Comma?

Commas are basic punctuation marks used before coordinating conjunctions when joining together two sentences or separating items in a list. They also are used after introductory phrases and work to separate interrupters and added detail from the rest of a sentence.

When commas are used, they work to provide clarity and definition to written materials. Without their use, your writing would be a “word salad” and create confusion or might be too superficial and immature in its tone and structure.

How to Use Commas in Lists

Commas are required to separate three or more words, clauses, or prepositional phrases placed in a series. There is discussion over whether the third comma, called a serial (or Oxford) comma, is needed. I believe there is a strong argument for the serial comma use, and I’ll explain more about why below.

How Commas Separate Words in Lists

Use commas in a list of three or more words to help your reader understand they are separate from one another.

Prepositional phrases consist of a preposition, object, and words that modify the object. They provide detail and interest about your main topic. Commas help separate them into understandable information.

How Commas Separate Clauses in Lists

Clauses are more detailed than just single words and phrases. Without the use of a comma, clauses would run altogether and create a confusing jumble of words.

It is permissible to remove the last comma due to the use of a coordinating conjunction, but if you choose to do so, follow that pattern throughout your entire text.

Examples of When NOT to Use a Comma In a List

Do not use a comma when conjunctions separate the listed items or the sentence only contains a two-element list.

You also do not need to separate pairs of items used together in a sentence.

What is an Oxford Comma?

The hotly debated Oxford comma or series comma is a punctuation mark that separates the last item in the series from the preceding one. It is placed before the coordinating conjunction and works to clarify that the final item is not a part of the others in the list.

The argument surrounding its use stems from the fact that the final comma is not generally needed to clarify the sentence. However, without its use, some sentences can become confusing or even comical.

Since you need to be consistent concerning your comma rules list choices, it is better to include the Oxford comma to avoid confusion.

To ensure the proper use of commas in a list, you need to decide if the Oxford comma is for you or if you want to avoid it altogether. Since its absence can create confusion, you may prefer to use it to prevent comical or even embarrassing misrepresentations. Its use makes a list clearer to read.

The list of elements commas separate includes names, events, and details to help your reader understand what you are trying to convey. Comma-separated lists are required to help clarify words, phrases, and clauses, and serve to provide clarity and proper sentence structure. This is one of the most straightforward rules of comma use and is easy to apply.