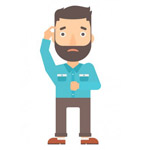 The English language has its plus and minus points when it comes to digging deep into the language. The tricky words with dual meanings sometimes create quite the challenge and often end up infuriating English lovers for the wrong use. Here we have a collection of 10 words that fit best on the above situation.

The wrong use of this word always stirs up unrest in linguists. This word actually means “something that happened in reality.” People have been using it in the wrong way like “We all laughed so hard that we literally died.” Another wrong use example follows as “The idea was so cool that it literally blew up my mind.”

Amazingly the super extensive wrong use of this word has convinced the Oxford English Dictionary to be used as a word expressing emphasis. Sad, we know.

“Ironic” has confused many people when it comes to its correct use. A normal understanding of its meaning lies with a very strange or unusual unfolding of events. However, this definition is not complete.

To make things easy, you can use it to express with the opposite meaning. The fun fact here is that “Irony is not supposed to hurt” like sarcasm.

In the background, irony has some pretty confusing continuations like historical irony, dramatic irony, and situational irony. Our suggestion would be to just let this word be. We can definitely work our way around this word.

This word has a negative prefix and suffix together and people think this increases the effect the word “regardless.” Well, it doesn’t. while regardless points towards “Despite” and similar meanings; “Irregardless” actually tends to mean “not without regard” or simply “with regard.”

Quite the head spinner right? Here’s some consolation. This word is not an official one and if you do not use it, English lovers will not lift an eyebrow.

Let’s clear the long-lasting confusion of who and whom. “Who” points to the subject of a sentence whereas “whom” makes the reference to the object of the statement. Next, let’s use one single example to settle this once and for all.

“Whom/who are you going to be accompanied by?”

Your answer can be “by him” and not “by he.” The trick to remembering the correct use is “whom and him both end with M.” this little hack might help you next time.

Here is a pronunciation whirlpool where many good English students fail to survive. The spelling requires to pronounce it as ko-lo-nel and the real pronunciation is kernel as in a corn kernel.

Its because the word is basically Italian but the French borrowed it and changed to spelling to coronel. Then the English came and called it kernel with the spelling of colonel. The French have now reverted back to their original spelling again. Why? We have no idea.

Let try to keep this one simple and straight. People think it means uninterested because of one culprit prefix “non”. In reality, the word expresses a feeling where one is so surprised that he doesn’t even know how to react.

Again, hoping to keep it simple so that the readers do not get carried away. Do not confuse the use of this word due to the prefix. That prefix is quite a tricky one. It has a very different meaning than what people think it really means. The word means a state of mind where one attentively listening to something with no biasness. It is not a synonym for uninterested.

You do not want a judge who will be uninterested, however, you do want a disinterested one.

This word misleads so many people for its similarity with enormous. Seems fair. People use it for describing the big size of something. That’s wrong.

This word actually means “severe or extreme evil.” You can understand its meaning better if you imagine people being executed in a torturing way. Limbs or nails being pulled away from the bodies, that kind of enormity is meant here.

here is another military rank to confuse us. Though this time the confusion is limited to UK and USA. In the UK the term got the pronunciation with an “F” – leftenant. The Americans stuck to the “say it as it seems” rule and pronounced it as loo-ten-ant. Looks like the Americans are winning at this one.

Combine the “un” prefix with a centuries-old word like “abashed” and you get yourself a widely used word – “unabashed.” Abashed means to confused someone or embarrass someone. Unabashed simply means the opposite of it. So be entirely unabashed to practice your new skills