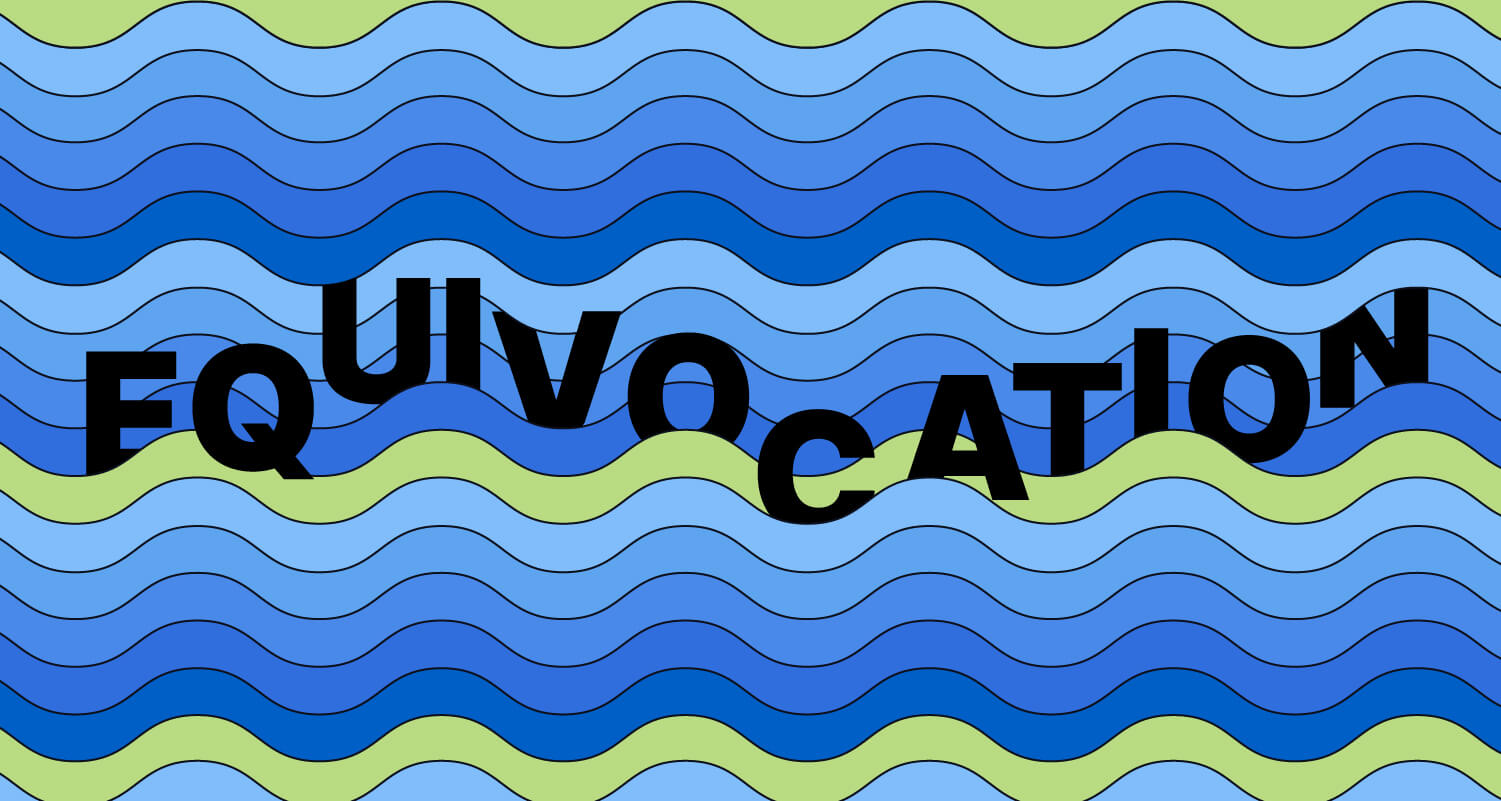 How many is a few?

As you’ve most likely heard people say (and quite likely said yourself), a few can mean three. Or four. Or seven. Because there’s no real cutoff for what makes “a few” of something. Nor is there a concrete cutoff for “a couple of things” or “several things.”

You’d probably feel deceived, and you might point out that they purposely used the phrase’s ambiguity to hide just how many times they actually slept through class. Because that’s exactly what they did. There’s a name for this kind of deception: equivocation.

What is the equivocation logical fallacy?

Equivocation, aka “calling two different things by the same name,” is the logical fallacy of using a word or phrase in an argument either:

Obviously, taco salad isn’t a dish most people would consider healthy. Sometimes, equivocation is used for a humorous effect. In other cases, it’s employed as a way to make a bad faith argument. For example, when asked about an overdue assignment, a student might tell their teacher that they worked on the assignment the night before. It’s technically true, but while the student assumes the teacher thinks they mean “finished,” they actually meant that they merely did some work on the still-unfinished assignment.

The phrase “bad faith argument” means a statement or position that the arguer knows isn’t honest or fair. Generally, individuals make bad faith arguments in attempts to avoid having to think critically about the issues they’re discussing and to avoid acknowledging that their opponents’ positions are well-reasoned and understandable. Equivocation isn’t the only logical fallacy that can be employed in a bad faith argument or an argumentative essay. Other fallacies that often arise in these kinds of discussions include the straw man fallacy and red herring fallacy.

Equivocation is often spelled out in this format: “If X is Y, and Y is Z, then Z must be X.” Here are a few examples:

Equivocation is easy to spot when it’s spelled out like this. It can even seem comically simple, so much so that it feels ridiculous to group it with other logical fallacies you might encounter in writing.

But equivocation isn’t always formatted this way. Sometimes, as we discussed in our example of the student telling their teacher that they’d worked on their assignment the night before, it’s used as a strategy to lie by omission. Here are a few examples:

What is the purpose of the equivocation fallacy?

Equivocation is often used as an obfuscation strategy. Another term you might know, doublespeak, refers to equivocation. A few common instances of doublespeak in English include:

Doublespeak often involves euphemisms, but it doesn’t always. Because there are so many ways to use equivocation, it can be one of the trickier logical fallacies to pick out in a piece of writing.

You can identify equivocation in writing by examining an argument closely to find the gap between the arguer’s initial claim and their final conclusion. This can take some dissecting, especially when you’re facing an argument that isn’t as clearly spelled out as those in the first set of examples we provided. Take a look at this example:

The arguer begins with the premise that self-defense classes teach their participants how to fight more effectively. Whether this is true or not, this is the arguer’s assertion. Remember, dismantling a logical fallacy involves pointing out the flaw in how the argument is constructed, not proving it wrong. Whether a statement is true or false has nothing to do with whether it’s fallacious or not.

Next, look at the arguer’s final conclusion: we shouldn’t have self-defense classes on campus. They don’t claim this is because the classes would teach participants how to fight better but because fighting is wrong. That second claim, that fighting is wrong, does not logically follow the first claim. Again, whether it’s true or not is irrelevant here—logically, a more sound claim would be that making students better fighters would lead to more interpersonal violence.

Working through an instance of equivocation requires some critical thinking to identify fact versus the writer’s opinion. Similarly, it requires you to take a nuanced look at the argument—while you might agree that fighting is wrong in most circumstances, you likely also agree that knowing how to defend oneself from an unprovoked attack can be an important skill.

When you’re facing equivocation in a written discussion or a face-to-face debate, ask your opponent to clarify their statement. Tell them that you can’t respond critically to vague claims, so in order to continue the discussion in good faith, you need specific examples or concrete figures. You can also ask them to explain how they came to the conclusions they’re stating—which, if they’re open to it, might cause them to see the flaw in their own argument.

What is the equivocation logical fallacy?

How does the equivocation logical fallacy work?

The equivocation fallacy works by relying on a word’s ambiguous meaning or distinct meanings to confuse and withhold information from the reader or listener.

How can you identify the equivocation fallacy?

You can identify equivocation in writing by examining an argument closely to find the gap between the arguer’s initial claim and their final conclusion. In some cases, it requires you to take a nuanced look at the argument and separate the writer’s opinion from fact.