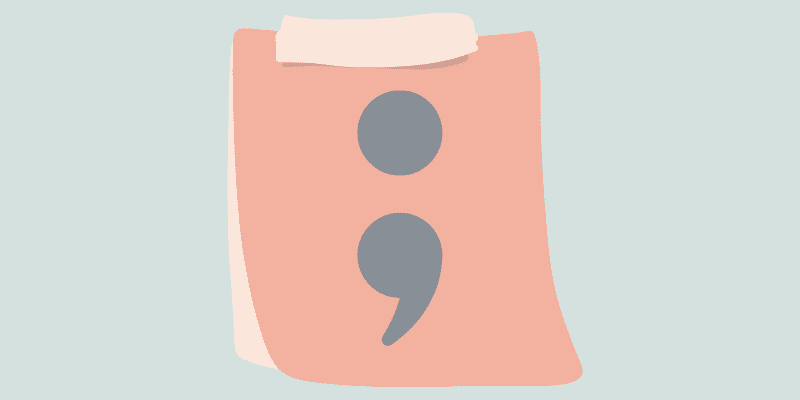 Semicolons are one of the most misunderstood and underused punctuation marks. Most of my students have never used one, nor do they recognize how it is used. I find it interesting they have never truly learned its use since it is such an easy element to include in their writing.

One of the best ways to use this mark is to help clarify lists in complex sentences. Becoming comfortable with this use also makes it easier to use between clauses.

The semicolon list examples included below help you see how

What is a Semicolon, and How is It Used?

A semicolon is a punctuation mark used to indicate a pause between two main clauses and, in many cases, replaces coordinating conjunctions. When used, it serves to highlight the second clause’s relationship to the first and works as a continuation of the main topic without having to use and, or, but, nor, yet, or so.

A semicolon is also used to help clarify complex lists to make them easier to understand. This is the use we are focused on in this article to better help you organize your writing.

Many people write out lists using bullets to separate the items, but this is a very informal way of writing and should be reserved for written communication between friends and family or for personal use.

When writing out lists as part of a sentence, you usually use a simple comma to distinguish one item from another. But, you need a semicolon when your list items already include commas used to join dependent clauses or phrases.

Also called a mega-comma or super-comma, the semicolon is used to separate elements in a complex sentence that already include a comma. They work to divide events, descriptive instructions, and locations.

How to Use Semicolons When Listing Locations

One of the simplest ways of using a semicolon to punctuate complex lists is when describing locations. Cities in states and countries require a comma to separate one from another, but if you plan on using more than one in a sentence, continuing the use of a comma creates confusion.

For example, the following incorrect sentence:

Becomes easier to read and correctly punctuated with semicolon use:

How to Use Semicolons to Divide Events

Providing information about events can quickly become convoluted and confused if not properly punctuated. When semicolons separate these types of lists, they are much more informative and easy to read.

Even if only one element includes a comma, the use of a semicolon is warranted.

How to Use Semicolons to Provide Descriptive Instructions

Semicolons also allow you to provide detailed instructions and steps without listing them separately.

How to Use Semicolons to Provide Detailed Information

Compound complex sentences are much easier to write and understand when you use semicolons. You can add detail and descriptions to elements without your words becoming jumbled and misunderstood.

Avoid the Overuse of Complex Lists in Sentences

Complex punctuation is a useful technique, but it should never be overused. They have their place and should be used in a purposeful manner, but never more than occasionally.

You want to avoid confusion through their use, not create it. If you have sentences that use this technique over and over, your reader will quickly tire of the redundancy and detail that may eventually serve to take away from the main point of your writing.

Be prudent in your word choice and sentence structure.

A semicolon is a punctuation mark that is used to replace coordinating conjunctions and to indicate the relationship between two main clauses. It also is used to help clarify complex lists to make their details understandable to a reader.

Lists with semicolons can provide an easy-to-follow organizational structure between list items and elements that already include punctuation. It makes long sentences more structured. The use of using long lists separated by semicolons should not be overused, however, as the sentences may become too long and complicated – thus losing their meaning.