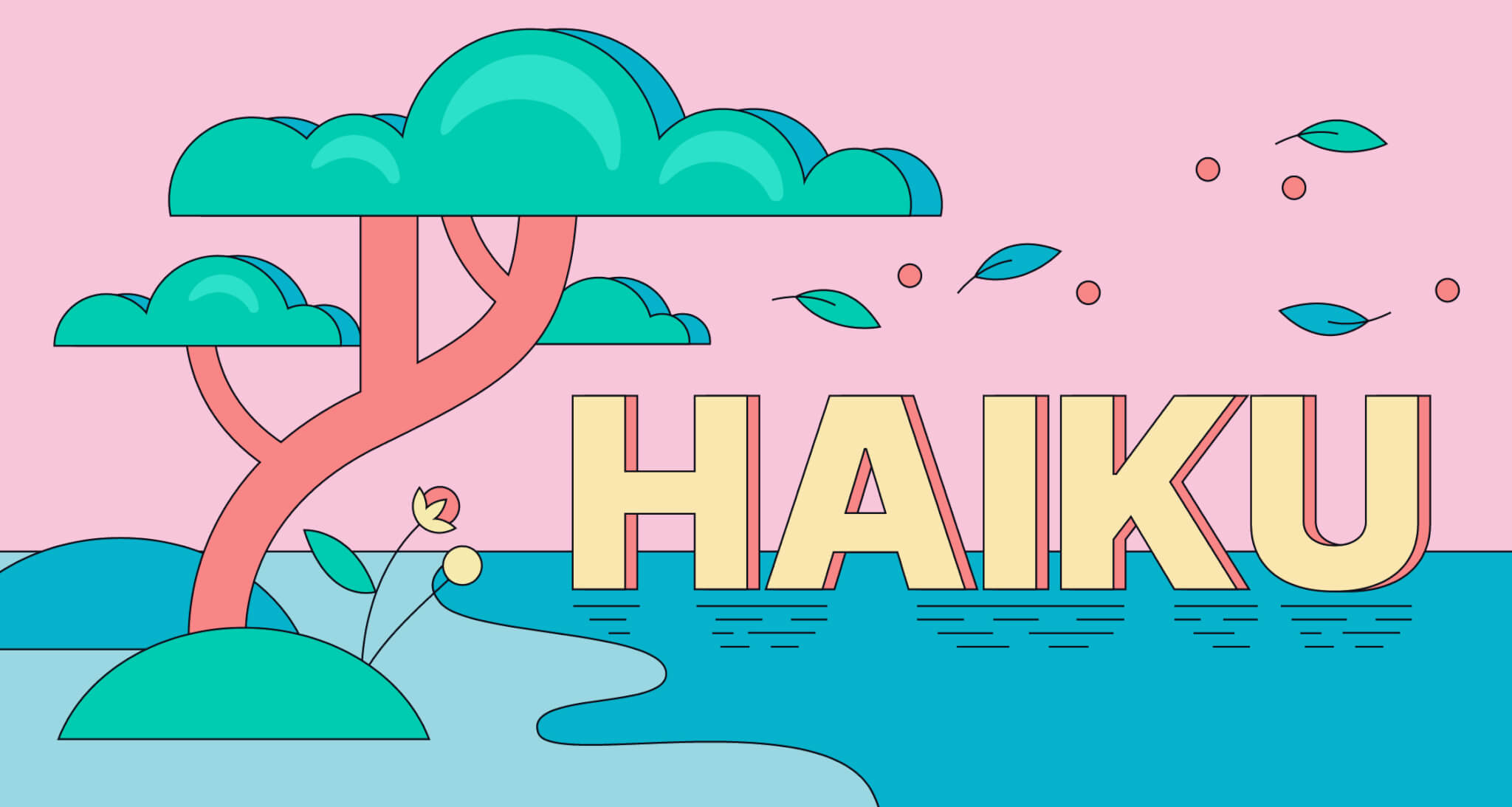 Haiku are not long.

But they can be tough to write.

A haiku is a short, unrhymed poem that adheres to a specific three-line, seventeen-syllable format. The form originated in Japan, but today people across the globe read and write haiku in many different languages. Because of different languages’ unique syllabic and grammatical structures, haiku have slightly different formats from language to language. The main format we’re working with in this blog post is the English haiku format.

What is a haiku?

Think back to your elementary and middle school days. You were probably assigned to write a haiku or two somewhere along the way. If you don’t remember the format, it’s simple: three lines total, five syllables in the first and third lines, and seven syllables in the second line.

We’ll go into more detail about how haiku are structured later in this post. For now, we’re going to focus on defining haiku and explaining where they came from and how the form evolved.

Haiku (pronounced high-koo) is a type of short-form poetry that originated in Japan. Although the name haiku dates only to the nineteenth century, the form has existed for hundreds of years. Originally, haiku were known as hokku and were a component of a larger poetic form known as renga. Renga are lengthy, linked collaborative poems that typically have multiple authors. By the seventeenth century, poets had begun writing hokku as standalone pieces, and by the end of the nineteenth century, poet Masaoka Shiki was reforming the genre while working within it. One of his reforms was coining the term haiku.

How are haiku different from other poems?

Traditionally, haiku are about nature. One common theme explored by historical and modern haiku poets is seasonal changes. Often, a haiku focuses on a single moment in time and, in many cases, juxtaposes two images.

Take a look at this example of a haiku by Matsuo Bashō, whose work played a significant role in haiku becoming recognized as a serious poetic form:

A frog jumps into the pond,

As with other poetic and literary forms, haiku has evolved over the centuries. While traditional haiku adhered to a specific structure and content requirements—more on that in the section below—modern haiku often deviate from these rules to experiment with new formats and explore new subject matter. Take a look at this twentieth-century haiku from American poet Alexis Rotella:

he watches my gauze dress

blowing on the line.

See how this poem still sounds and feels like a haiku despite not adhering to the traditional format? Poetic forms are often descriptive, not prescriptive. That means that when a poem fits a specific form’s rhythm and other general requirements, it’s often considered to be in that form. By contrast, “prescriptive” means that only poems that fit precisely into a specific form are considered to be in that form.

You see this with other poetic forms as well, like sonnets and villanelles. Within certain forms, such as sonnets, distinct subtypes emerged as poets carved out their own takes on the form. Haiku are unique because, although poets have played (and still play) with the format, distinct subtypes have not emerged—at least not yet. But as poets continue to innovate haiku, it’s possible that we’ll see new types develop in the future. Poets are often innovative and insightful, as you’ll see in our collection of poetry quotes.

How is a haiku structured?

One of haiku’s defining characteristics is its concise structure. In English, the structure is:

If a poem doesn’t follow this structure, it’s not a haiku—at least in the traditional sense.

Beyond this structure, there are a few more rules to writing a traditional haiku. One is that the lines cannot rhyme. Another is that in Japanese a haiku is written as one line. In English (and some other languages), it’s written in the three-line format seen above.

But wait—we said a haiku follows the structure above in English. What about in Japanese?

In Japanese, a haiku consists of seventeen on (phonetic units in Japanese poetry similar to syllables) arranged in the familiar five-seven-five pattern. In many cases—but not all cases—a Japanese word has the same number of on as it has syllables in English.

Another defining characteristic of haiku in Japanese is the inclusion of at least one kireji. A kireji, translated as “cutting word,” is a grammatical category of words that create a pause or sense of closure. There is no direct equivalent to kireji in English, and in many translated haiku (and other traditional Japanese poems), the kireji is represented with a punctuation mark like an ellipsis or a dash.

As an English-language haiku writer, you can choose to include punctuation or onomatopoeia to fill the kireji role, but it’s not a requirement. Many poets simply leave out the kireji if it doesn’t work with their chosen theme.

A haiku also needs to contain a seasonal reference, known as a kigo in Japanese. Just like with a kireji, English-language haiku don’t always include this component.

4 steps to writing a haiku

Writing a haiku is similar to writing just about any other kind of poem or other piece of text: it follows the writing process.

The first step is to brainstorm to generate ideas. What do you want to write about? Do you want your haiku to explore traditional topics, like changing seasons and other parts of nature? Or do you want to explore something more modern, like your relationship with a sibling, a trending story, or one of your hobbies?

Jot down all your ideas. This part of the process is known as prewriting, and it involves building on your brainstorming and outlining. With a haiku, you probably aren’t going to write a full-fledged outline, but you might note how you want to arrange your haiku or play with different word combinations to fit the syllabic structure. Also, think about the general rules of writing poetry, like avoiding clichés and writing from a place of honesty. These aren’t requirements for your haiku, but they can be helpful guidelines.

During the prewriting stage, decide whether you’ll adhere to the established haiku structure or write a more free-form haiku. You can always change your mind later if the lines you write don’t exactly fit the five-seven-five format, but it can be helpful to have an idea of your format from the outset.

Whether you’re following the five-seven-five format or not, give yourself room to play with words. Group words according to their syllable counts and say them out loud to hear how they sound together. Do this whether you plan on performing your haiku aloud or not—a key part of any poem is its rhythm and flow, so make sure you’ve got a beat that complements your words and subject matter.

Once you’ve written a draft, give it some time to cool off. You’re a better editor when you revisit your work with fresh eyes, so with your first draft finished, take some time to do something else.

About twenty-four hours or so later, come back to your haiku. Read it aloud again and listen to how it sounds. You might catch an awkward string of syllables or a spot where you can substitute a stronger word that you didn’t notice just after finishing the draft. Make these changes to shape your haiku into a stronger second draft.

At this stage, you could be finished. If your hope was simply to write a haiku, you achieved your goal by finishing up that revised second draft. But if your goal is to publish your work, that’s the last step. You can publish your haiku yourself on a blog or by sharing it with your network, or you can submit it to a magazine or chapbook for publication.

Take a look at these examples of haiku, traditional and modern, by poets from around the world:

too dark to read the page,

a spider, how lonely I feel

in the cold of night!

I long for Kyoto.

What is a haiku?

A haiku is a short, unrhymed poem that adheres to a specific three-line, seventeen-syllable format. Traditionally, a haiku depicts a tiny moment in time and includes a kireji (a “cutting word”) that creates a pause or sense of closure.

What are common haiku themes?

Traditionally, haiku were often about nature and seasonal changes. Over time, poets began exploring other themes in haiku. In both traditional and modern haiku, it’s common for the poem to focus on a small moment and juxtapose distinct images for dramatic effect.

What are the rules for structuring a haiku?