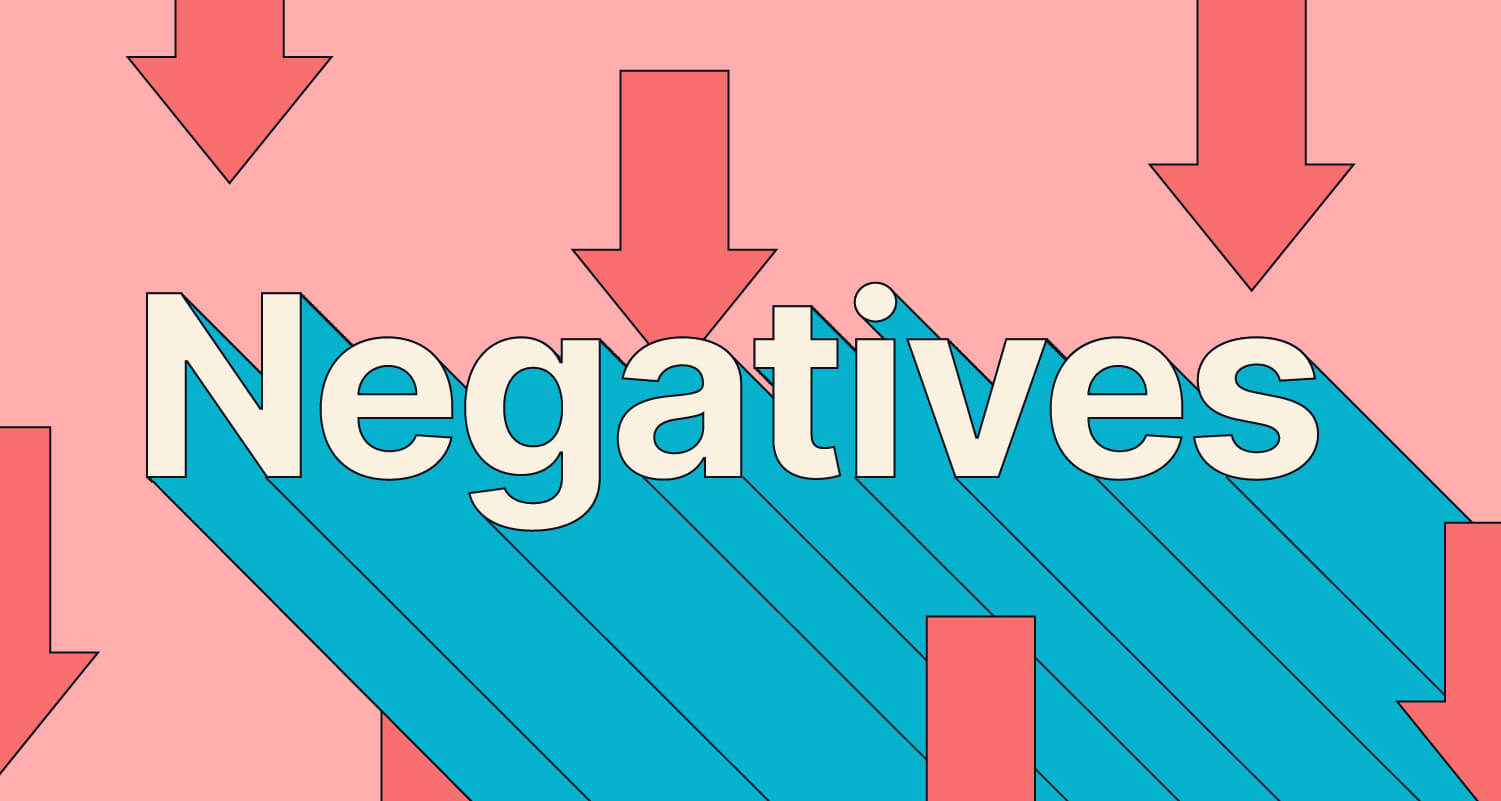 Negatives like not or never are words that change the meaning of another word or of a sentence to its opposite. They usually show an absence, a contradiction, or a denial—anything that’s not positive.

Double negatives are a common grammar mistake in which the two negative words cancel each other out. The meaning is reversed twice, which technically returns the statement to its original positive form—and in the process, can create confusion about the intended meaning.

Below, we discuss negative words and how to use them. We’ll also cover double negatives and explain how to avoid them with a few double negative examples. But let’s start with the question: What is negation?

What is negation in grammar?

In grammar, negation is a concept whereby certain words change the meaning of another word or of a sentence to its opposite. The most common example is the negative adverb not, used with auxiliary verbs like do or be to reverse or negate the original meaning of a sentence.

These two sentences have completely opposite meanings, even though most of the words are the same. The main difference is the word not (and its necessary partner do), which reverses the entire meaning.

In addition to the negatives listed above, some words are inherently negative forms of other words. Antonyms, or words with opposite meanings of each other, often share the same root word, but a negative prefix reverses the meaning of one of them.

For example, possible and impossible are antonyms because they have opposite meanings. The only difference are those two letters at the front, the prefix –im, which completely reverses the meaning.

There are a few prefixes that negate the meaning of a word:

How are negatives used in sentences?

In general, a negative word comes before the word it negates. So if you want to negate the verb like, you put the negative adverb not or never in front of it.

I never liked waking up early.

The word not has special rules, though. If the verb of the sentence is be, you put not in front of the predicate noun or predicate adjective (explained in our guide to linking verbs). Usually, this means placing not after be.

You are not the boss of me!

She was not ready for life after college.

If the sentence uses the auxiliary verb have, as with all of the perfect tenses, place not directly after the conjugated form of have and before the main verb participle.

[conjugated have] + not + [participle]

They have not seen the movie.

He has not been practicing enough for the championship.

They do not have time to see the movie.

If the sentence uses a modal verb, like should, must, or can, place not after the modal verb and before the main verb. Don’t forget that, with modal verbs, the main verb uses the bare infinitive form (without to).

He can not swim.

You should not eat food off the floor.

For all other verbs, you must use the auxiliary verb do. In this construction, only do is conjugated, and the main verb uses the bare infinitive form (without to).

[conjugated do] + not + [bare infinitive of main verb]

He does not leave the house.

They did not study last night.

This includes sentences that use do as an action verb.

I did not do my homework.

Before we continue, remember that the word not is commonly used in contractions. In spoken English especially, contractions are quite common. If you ever see -n’t at the end of a word, it means not.

With questions, the subject and the verb are switched. In this case, do and not come before the subject, and the bare infinitive of the main verb comes after.

To negate a noun, you can simply put the adjective no in front of it.

The desert has no water.

No cars can use this road.

However, you should avoid using the adjective no in front of pronouns.

Negative nouns don’t have any particular rules about how to use them—except to avoid double negatives, which we explain below.

No one is safe from taxes.

They gave us nothing but trouble.

How do you use neither/nor?

The pair neither/nor acts as a negative correlative conjunction to connect two or more parts in a series. It’s the negative version of the pair either/or and is used the same way.

Using neither/nor can make communication more efficient. Instead of saying something like this:

Adding neither/nor can shorten it to this:

Neither Hansel nor his sister Gretel was good with directions.

When using neither/nor, you do not need the word not because the pair is already negative.

You can use neither/nor to connect nouns, verbs, clauses, adverbs, adjectives, and phrases. However, you must always use parallelism with neither/nor, which means if you use neither with a noun, then nor must also be used with a noun, and so on.

This example is wrong because neither/nor connects an adjective and a verb. We need to make both parts verbs for parallelism.

Moreover, you can use neither/nor with any number of parts. Simply add nor before each new part in the sequence (neither is used only once at the beginning).

Neither Sleepy nor Happy nor Grumpy nor Bashful nor Sneezy nor Dopey nor Doc knew how to wake up Snow White.

There are also some important rules about subject-verb agreement when using neither/nor as the subject of a sentence.

If all parts of the neither/nor construction are singular, treat the entire subject as singular.

Neither Hansel nor Gretel was hungry for candy anymore.

If one of the parts of the neither/nor construction is plural, the verb should match the final part in the series.

Neither TV nor movies are easy to make.

Neither movies nor TV is easy to make.

How do you use neither without nor?

Although commonly used as part of a pair, the word neither can still be used on its own as an adjective, adverb, or pronoun.

As an adjective, neither comes before a noun to mean “not this one or the others.”

The word neither always implies there are other parts. So the example above suggests the speaker is talking about more than one restaurant.

As an adverb, neither affects verbs to show that a negative statement also applies to someone or something else.

I don’t eat meat and neither does my boyfriend.

As a pronoun, neither can replace nouns that were previously mentioned.

I planted two tomato seeds, but neither grew.

Just remember that neither is always negative, so you can’t use it for positive statements.

What is a double negative?

Think about it logically; if one negative reverses the meaning of a word or sentence, then a second negative would change the meaning back to its original state. It’s a negation of the negation. Essentially, a double negative creates a positive and can muddle the meaning of a sentence in the process.

This sentence really means “I have money.” If you want to talk about a lack of money, use only one of the two negatives.

Double negation is especially problematic for negative adverbs like hardly, seldom, barely, scarcely, and rarely. These words are often used incorrectly with negatives, which changes their meaning completely.

However, words with negative prefixes, like unnecessary or misinformation, can still be used with negatives. Just be careful that your meaning is clear—it’s easy to get confused.

In most cases, it’s best to simply use the positive phrasing for the sake of clarity.

Regardless of grammar rules, it’s still common to see double negation used for stylistic purposes, often in pop culture or in informal speech. Even Jane Austen, the beloved English writer, liked to break the rules by using a double negative on purpose to mean a positive.

Still, it’s advisable to avoid double negatives in order to keep your meaning extra-clear to your reader.

What are negatives in grammar?

Negation is the use of negative words to reverse the meaning of a word or sentence. Adding a word like not or nothing to a sentence can drastically alter what it means.

What are double negatives?