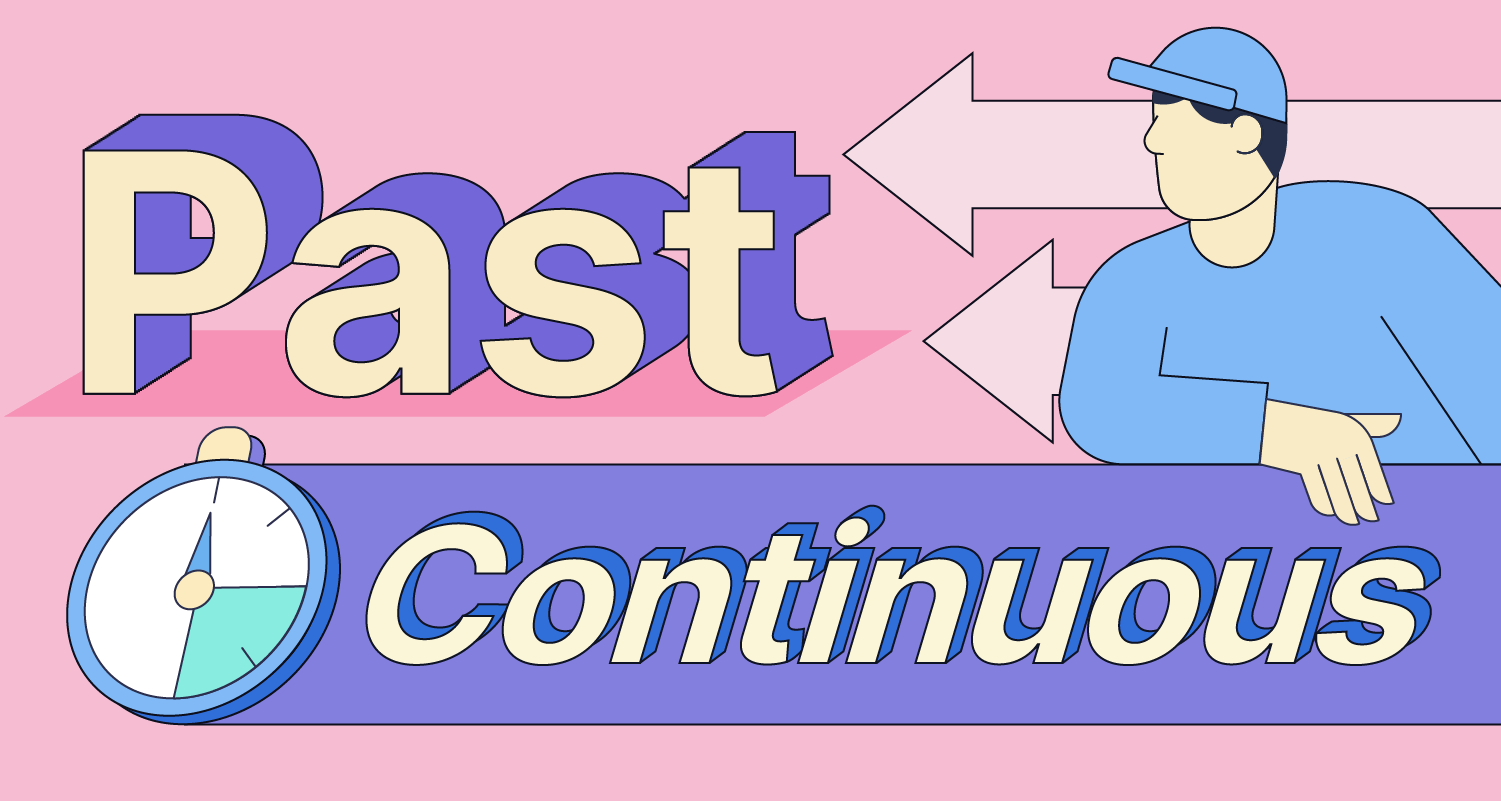 The past continuous tense, also known as the past progressive tense, describes ongoing actions in the past, such as I was writing my research paper all night. It uses the same construction as the present continuous tense except with the past tense of the verb to be.

What is the past continuous tense?

The past continuous tense formula involves the past tense of to be (was or were) and the present participle of the verb, the –ing form.

While I was studying, my friends were playing.

Keep in mind that you must conjugate to be to match the subject. Use was for first- or third-person singular subjects, such as I, he, she, or it.

She was working on an email when the fire alarm rang.

The team was playing well until the second half.

Use were for all other subjects, including all plural subjects and the singular second-person subject, you.

You were becoming a great novelist before switching to screenplays.

The days were getting shorter as winter approached.

Verbs you cannot use in the past continuous tense

As we explain in our grammar guide, there is a certain type of verb that cannot be used in any continuous tense, including the past continuous tense. These are called stative verbs, also known as state-of-being verbs or, fittingly, non-continuous verbs.

Stative verbs are less like actions and more like states or feelings. They describe continual states of mind, such as opinions, needs, or awareness. Some of the most common examples of stative verbs include:

Because stative verbs are inherently continuous, it sounds odd to put them in a continuous tense. Avoid using the above words in the past continuous—you can use them in the simple past instead.

5 past continuous tense uses and examples

1
An action in the past that gets interrupted

One of the most common uses of the past continuous tense shows a past action that was interrupted by another past action. These are often complex sentences featuring subordinating conjunctions like when, while, before, after, until, or whenever.

Marta was leaving her apartment when she heard the thunderstorm.

They were sleeping peacefully until the alarm rang.

My parents arrived while I was shopping.

2
Ongoing actions at a specified time

When you mention an exact time in the past, use the past continuous tense if the action started before that time and continued afterward. If the action begins at the time mentioned, use the simple past instead.

At midnight, everyone at the party was still having fun.

I was working as a cashier in October.

By the age of nine, I was training to be a ninja.

3
Habitual actions in the past (usually with adverbs like always)

Use the past continuous tense to talk about an action that used to be done frequently in the past but is not done in the present. This form is usually used with adverbs and adverb phrases, specifically ones that suggest the action was done a lot, like those listed below:

You can also use the main adverbs of frequency (rarely, seldom, sometimes, occasionally, often, frequently, usually).

As a baby, my brother was always making a mess.

My first year of college, I was making spelling mistakes all the time.

She was forever trying to impress her crush.

4
Emphasizing how long a past action took

You can also use the past continuous tense to emphasize how long an action took and highlight just how much time was spent doing it. This form usually uses adverb phrases that explain the length of time, such as:

The players were training all year for this match.

She was gardening all morning and missed the delivery.

I was trying to complete the final level for hours.

5
Setting the background for a story

The birds were singing, and the sun was shining. I knew it would be a good day.

Everyone at the cafe was enjoying their coffee. Then the stranger appeared.

The city was going about its business without knowing the aliens had arrived.

Past continuous vs. simple past tense

The past continuous is often confused with simple past tense—this might be because some sentences can use either.

My hamster was sleeping all day.

My hamster slept all day.

The simple past is generally more commonly used. However, there are subtle differences worth mentioning.

When you use a subordinating clause (such as a clause starting with when) with another action, keep these distinctions in mind:

In the example below, which uses the past continuous, the speaker started running before the whistle blew:

When the whistle blew, I was running.

In this example using the simple past tense, the speaker started running after the whistle blew:

When the whistle blew, I ran.

At noon I was eating lunch.

At noon I ate lunch.

In this example, which uses the past continuous tense, the cat continues to nap after the owner returns:

The cat was napping when its owner came home.

Whereas in this example, which uses the past perfect continuous tense, the cat was napping but stopped when the owner returned:

The cat had been napping when the owner came home.

What is the past continuous tense?

The past continuous tense shows an ongoing action that began in the past, such as I was studying for the test all night.

How does the past continuous tense work?

The past continuous tense is formed by the past tense of to be and the present participle (the –ing form) of the verb.

When should you use the past continuous tense?

Use the past continuous tense to show a past action that has been interrupted or a habitual action that no longer occurs. You can also use it to emphasize the duration of time an action took or to set the background for a story.