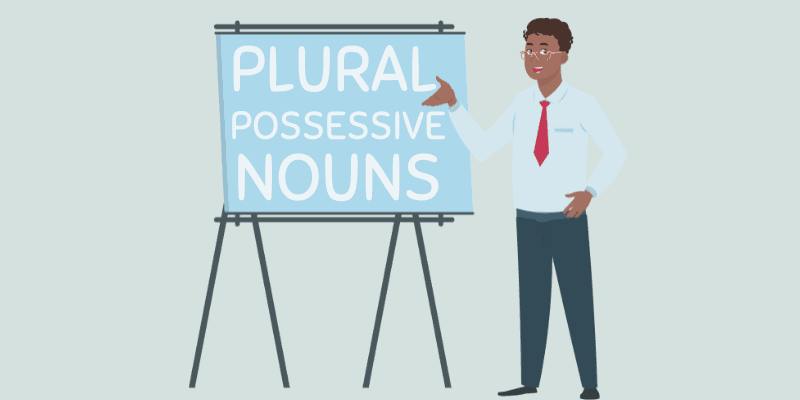 The majority of English speakers struggle with apostrophe placement, especially when trying to show ownership. Does the apostrophe go before the -s or after?

If you struggle to find the answer, you aren’t alone. However, despite their nefarious-sounding name, plural possessive noun examples aren’t tricky to understand.

To prove this point to my students, I make sure we work together to redefine each part of the tongue-tying name. Reminding them that they know what plural, possessive, and noun means helps them realize they aren’t dealing with a trick question.

Knowing how to properly punctuate plural nouns to show ownership is important for grammatical clarity. It is a skill you need to master if you want to be understood. Let’s first look at possessive rules and plural nouns and then take the leap to better understand how you can combine them.

Nouns are simple. There aren’t multiple types of nouns to muddy the waters and make it difficult to apply grammar rules. Nouns are defined as a person, place, thing, or idea and serve as the subject and/or object of a sentence.

Nouns can be singular or plural, meaning there is only one or many.

Nouns can also be possessive, meaning they show ownership. A singular form of a noun is straightforward. To show possession with a singular noun usually only requires the addition of an apostrophe -s.

But, plural possessive nouns can be more complex, especially if they already have a -s located at the end of the word.

What is a Plural Possessive Noun?

Once my students remember what a noun is (it’s amazing how quickly the regular use of simple parts of speech makes you forget how they work), it isn’t hard for them to define a plural possessive noun.

A plural possessive noun is a plural noun with a possessive end. These people, places, or things show ownership in some manner.

When to Use Plural Possessives

Use plural possessives to indicate multiple nouns that own something.

Almost all the plural words end in an -s. To make a plural noun possessive, you add an apostrophe after the -s.

Irregular plurals are those that don’t end in -s. To make these nouns possessive, you follow the same rule of making singular nouns plural and adding an apostrophe -s.

Proper nouns that already end in an -s allow you to choose how you show possession. The majority of nouns do not end in an -s, but in the chance they do, you have more than one choice to make them possessive.

You can add an apostrophe after the -s to make it possessive.

You can also choose to show possession by following the noun with an apostrophe -s.

If you are using two or more nouns that have the same ownership, then only the last noun requires the plural possessive form. You do this by adding an apostrophe -s.

If you are using two or more plural nouns that have different ownership, each noun requires an apostrophe -s added to the end of each.

To help drive the proper grammar of plural possessives home, let’s look at more examples and then practice with our own.

Plural possessive nouns are used in a sentence to show ownership by more than one person, place, or thing.