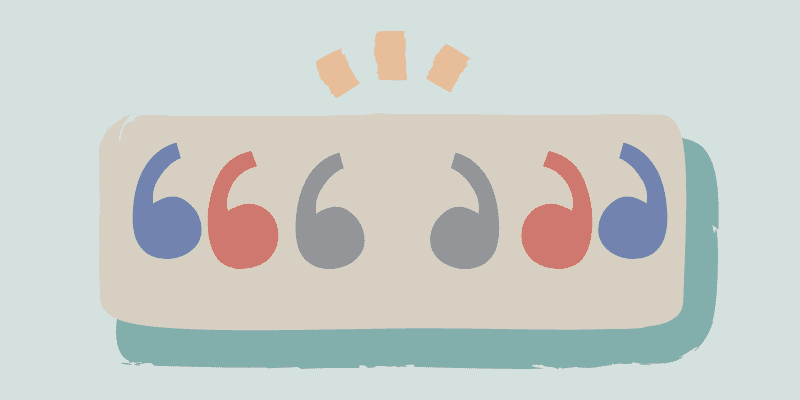 Many English writers get confused about the English guidelines on quoting within a quote. Where should you place the single quotes? When do we use the double quotes?

Let’s discuss the basic rules on how to quote a quote. I also shared some sentence examples that will help you understand the topic.

How to Quote a Quote

At the end of every sentence, single and double marks should appear as a matching closing quotation mark. This signals the end of the inner and outer quotations.

Below are more examples:

Another essential rule is to use the same opening and closing speech marks.

How to Quote a Quote with Exclamation Points

Remember to place the punctuation mark within the single closing quotation mark.

Notice there’s no period after the inner quote’s last word, “living.” That’s because one of the many quotation mark rules is that the stronger mark wins. Exclamation points and question marks are “stronger” than periods, so there’s no need to add one.

How to Quote Multiple Quotes in One Sentence

It’s also possible to quote multiple quotes within a quote in only one sentence.

In the sentence above, two quotations are enclosed within double quotation marks.

When to Use Apostrophes

Apostrophes are known as the most abused punctuation marks in the English language. Never use them to quote statements. Instead, they should only have two functions: to show possession and to indicate a contraction.

When to Use Colons When Quoting

Creative writers can choose whether they want to use commas or colons for dialogues. In formal writing, commas are more common. However, some style guides recommend using a colon if the introduction is an independent clause.

Another rule for colons vs. quotation marks is to use a comma if the introduction is not an independent clause.

You can only use a comma after a quotation.

How to Use Semicolons in Quotes Within Quotes

It gets more complex when unusual punctuation marks are inside quotes within quotes. But you can use semicolons the same way we use them outside quotations.

Quotes Within Quotes in British English

Notice how the period is outside the outer quotes. British English punctuation rules state that commas and periods are always outside the closing quotation mark. The only exception is when the marks are part of the quotation.

Summary of Quoting Within Quotes

I hope this guide helps English writers correctly use quotes within quotes. Remember, if you’re a British writer:

But if you write for Americans: