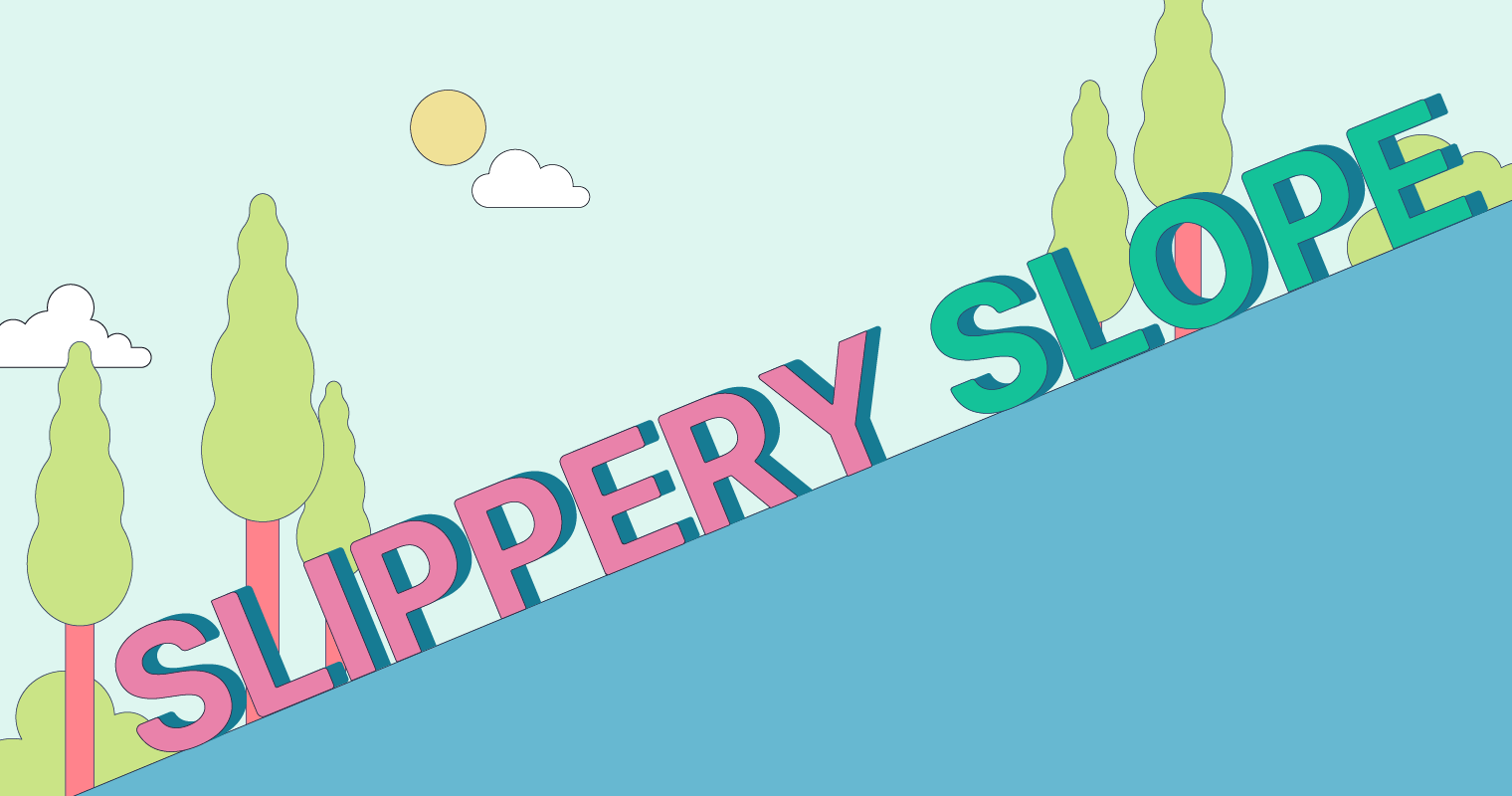 Do you see a pattern emerging here, where one action supposedly affects another and another? This, in a nutshell, is the slippery slope fallacy.

What is the slippery slope fallacy?

The slippery slope fallacy is a logical fallacy that claims one event or action will lead to another, more extreme event or action. This could be by directly causing that follow-up event, setting a precedent for it, or simply creating an environment where that follow-up event can occur. Other names for the slippery slope fallacy include the dam burst fallacy, domino fallacy, and thin end of a wedge.

Here is a quick example of the slippery slope fallacy:

Obviously, taking a rigorous course load as a high schooler generally makes you a more attractive applicant to colleges. But to claim that you can’t get accepted to a highly ranked college without taking honors courses is inaccurate—and fallacious. That’s what separates the slippery slope fallacy from logically extrapolating how a scenario will likely turn out:

The slippery slope fallacy is an informal fallacy. That means that the logical disconnect is within the argument’s content, rather than its structure. In other words, it’s possible to make a logical argument in the same format as a slippery slope claim, like in this example:

Other informal fallacies include the red herring fallacy and the ad hominem fallacy.

With the appeal to probability, the arguer assumes that because something is possible, it’s guaranteed.

Keep in mind that even if these outcomes turn out to be true, they are slippery slope arguments because of the assumed connection between the initial change and its result.

What are the different types of slippery slope fallacies?

Look at these examples of the conceptual slippery slope fallacy:

Can a slippery slope argument be logically sound?

Yes. As we mentioned above, it’s possible to make a logical argument using the same kind of reasoning that often leads to a slippery slope fallacy. Look at this example:

It’s not illogical to claim that relaxed admission requirements would lead to more students attending a school—after all, more students are now qualified to attend. The difference between a fallacious and non-fallacious slippery slope argument is the likelihood that the initial event will lead to the result claimed. This isn’t an exact science, and because of this, an argument might hover somewhere between logical and fallacious.

As a writer and discerning reader, the best you can do to spot, argue against, and stop yourself from making slippery slope arguments is to separate facts from speculation and research any relevant statistics related to a claim. Determine whether there is evidence to support the claimed relationship between two or more events, and where possible, see if there’s any record of the arguer’s claim actually happening. But keep in mind that just because something has happened in the past doesn’t guarantee that it’ll play out the same way again—though there’s a possibility it will.

This is similar to the strategy you can use to determine whether a claim about somebody is a relevant point or a straw man argument—do the facts support the claim, or is it an oversimplified, extreme take?

It’s also important to review your writing carefully before sending, posting, or submitting it. You might make a slippery slope argument without realizing it or simply present a tenuous relationship between two events as stronger than it is. While you’re at it, it’s a good idea to check your grammar and spelling as well.

As you read through a rough draft, pay close attention to things like your word choice and where you can make your work more efficient and organized. Sometimes, changing a slippery slope argument into a logical one is as simple as swapping out a few words or structuring your claim in a different way.

What is the slippery slope fallacy?

The slippery slope fallacy is the assumption that one event will lead to a specific outcome, or that two distinct events must be handled the same way because of an overlapping characteristic, regardless of the presence of data to support this claim.

How does the slippery slope fallacy work?

The slippery slope fallacy works by creating an assumed relationship between two or more events. For example, an arguer might claim that building new cell phone towers will disorient birds, which will lead to insect infestations due to a lack of predators for them.

What are the different kinds of slippery slope fallacies?