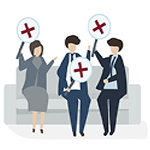 “We have gone through a lot of difficulties. (Subject of the verb gone)

The kids and I were enjoying playing. (Subject of the verb enjoyed)

The object form is used when the pronoun is the object of a preposition.

Reminder: These are included in preposition with, under, in, on, to and between. Here are two illustrations related to accurate usage:

“The dog starts barking at him after seeing a piece of chicken in his hand. (Object of the preposition at)

She gave gifts to John and me. (Object of the preposition to) “

The object form is necessary when a pronoun is the direct object of a transitive verb. An example of correct usage is giving below:

“The coach praised them for their good performance in the match. (Direct object of the verb praised)”

Note: The corresponding possessive forms are associated with personal pronouns.

Your, her, his, our, their and it’s are the possessive adjective forms. These forms stand in front of the possessed nouns. Examples:

“Rahim is their friend. (Personal pronoun they is associated with a possessive adjective)

Bonney is her cousin. (Personal pronoun she and her is associated with a possessive adjective)”

Mistake #5: The personal pronoun is replaced by Reflexive Pronoun

“Reflexive pronouns” or “Emphatic pronouns” are the ones that end up with – self or –selves. Some examples related to their correct usage are below:

“The owner of the pizzeria himself delivered my pizza today. (Emphatic pronoun)

The girl tried to cut herself with a scissor. (Reflexive pronoun)”