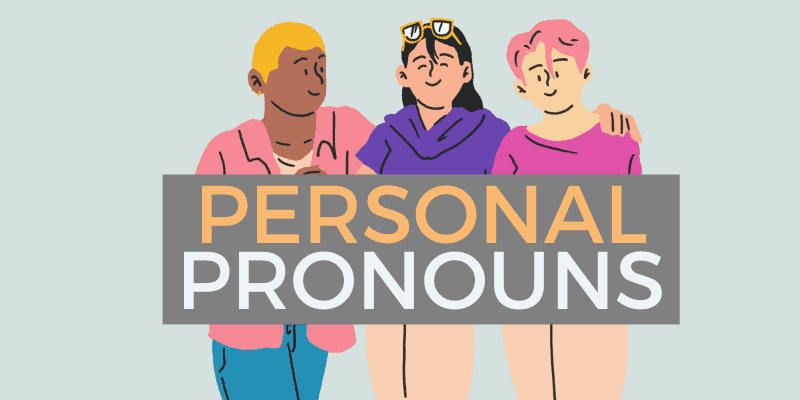 The words I, you, he, she, it, and they are paramount in English language and writing. These are called personal pronouns.

What is a Personal Pronoun?

A personal pronoun in the English language includes I, you, he, she, it, we, they, and more. These types of pronouns function as subjects or objects in a sentence to replace names of persons, places, things, and events.

It’s important to note that personal pronouns are gender-specific pronouns. For instance, he is a masculine pronoun, while we use she to make the pronoun feminine. But aside from the gendered pronoun, there is also it, which is a singular gender-neutral pronoun.

Point of view is a term to show the position where something or someone is observed. Personal pronouns indicate points of view, too. For instance, first- and second-person pronouns I, we, and you are familiar in first-person POV writing pieces.

The first-person personal pronouns are I, me, we, and us.

The second-person personal pronoun is you.

The third-personal pronouns are he, him, she, her, it, they, and them.

What are the 3 Types of Personal Pronouns?

Let’s take a look at the three types of personal pronouns in English.

Personal subject pronouns or subjective pronouns act as subjects in the sentence. They appear before a verb to show that they are the doer of the action. Below is the list of pronouns in English:

The pronouns I, you, he, she, and it are singular. You, we, and they are in plural form.

I laid out some personal pronouns examples in sentences for you.

Remember not to use a term like my wife and I unless it’s the subject of verbs. I can’t be an objective pronoun.

You might use subject pronouns for predicate nominatives if you are a highly grammatical person. This functions not only with action verbs but also linking verbs. Here are some examples:

Another thing I want you to know is that an imperative sentence usually has the second-person pronoun you as the invisible subject. For example:

In some languages like Spanish and Portuguese, verbs are not required with foreign pronouns in the subjective case. But French requires subject pronouns with verbs because many conjugations have the same pronunciation.

Personal object pronouns can act as objects in sentences. They are also called an objective pronoun. These include:

Pronouns in objective case can function as direct objects or recipients of actions in the sentence. For example:

Here are some examples of possessive pronouns in sentences.

Some people do not identify as she or he. They and them are deemed acceptable as non-binary pronouns by Merriam-Webster, Associated Press, and other language guides.

It’s mostly known as a third-person plural pronoun. However, we can now consider it a third-person singular pronoun when talking about other people. This small step helps promote gender-neutral language in English.

How Do You Use Personal Pronouns in a Sentence?

I made some sentences for you that show personal pronouns in use.

Here are some noteworthy real-life examples of personal pronouns used by authors:

I hope this personal pronouns list and guide help you produce better-sounding sentences. Test your understanding by answering the worksheet below.