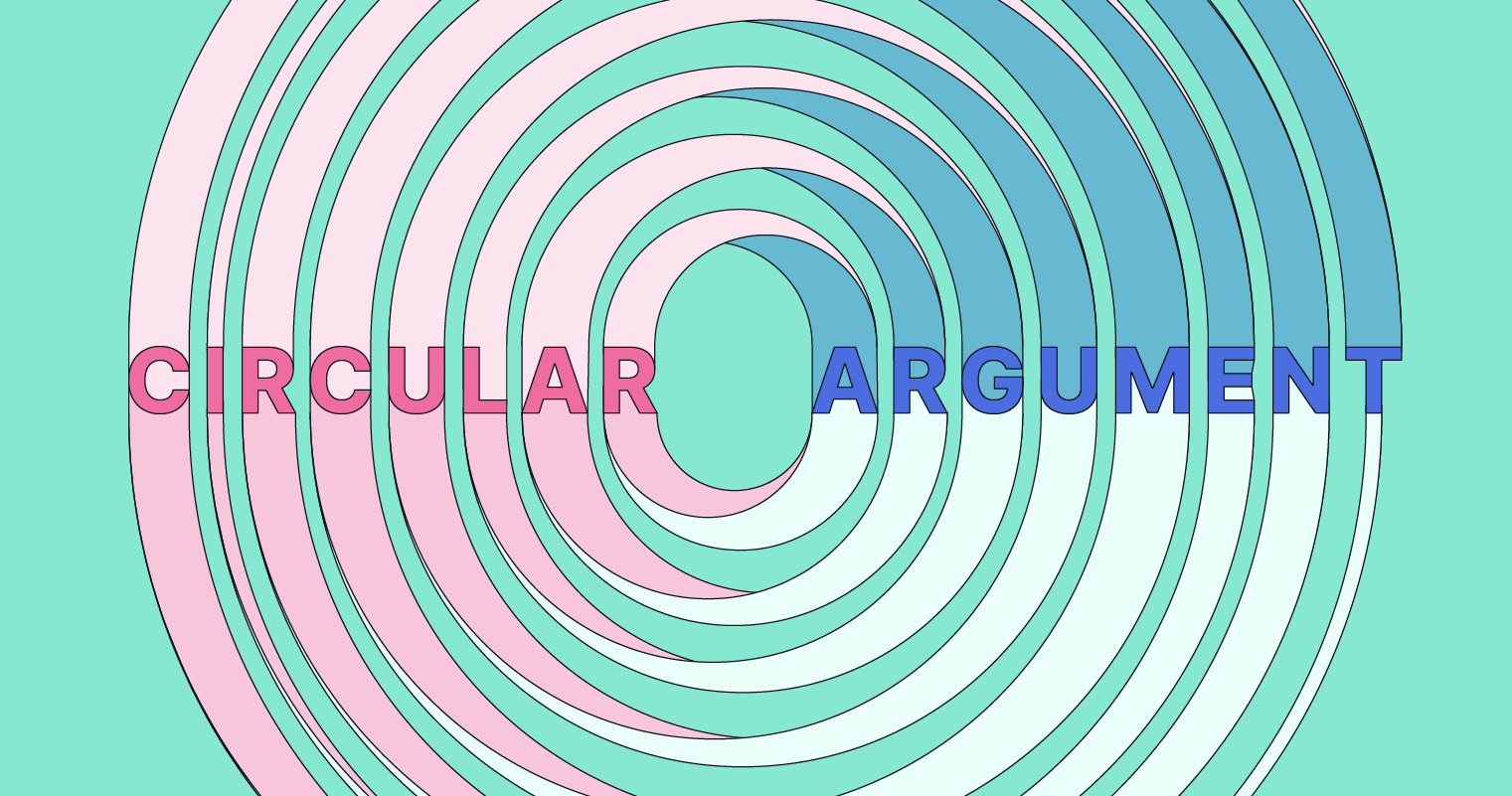 Does that make sense?

What is a circular argument in writing?

To illustrate what we meant by “you can’t define something by using it as the definition,” here are a few examples of a circular argument:

A circular argument, also known as circular reasoning, is considered a logical fallacy because when you make this type of argument, you aren’t supporting your claim with logic. Instead, you’re using your claim to “prove” that the reasons for the claim are true.

To go back to our first example, imagine Ryan’s brother says that Ryan makes delicious burgers. You ask what makes the burgers so delicious, and he tells you it’s because Ryan is an excellent cook. That might be true, but logically, it doesn’t support the claim. A logical way to support this claim might be to explain that Ryan developed a unique spice blend for burgers, or that he uses high-quality ingredients.

Circular reasoning can appear in just about any type of communication. You might run into it in literature, social media comments, speeches, or everyday conversation. People use circular arguments for a variety of reasons. Sometimes, it’s because they genuinely believe they’re making a logical statement. In other cases, it’s to acknowledge a paradox or critique a situation that forces people to make illogical choices.

It’s not uncommon to come across circular reasoning in political rhetoric. Often, this is in relation to the lawfulness or unlawfulness of a specific policy.

Circular arguments are also made as a way to ponder paradoxes. Perhaps the most famous paradox is this: “Which came first, the chicken or the egg?”

A paradox is a statement that seems to contradict itself, but in fact, it is logically sound. Often, they’re meant to be thought-provoking. Here are a few examples:

A similar concept, a catch-22, refers to a scenario where someone can’t “win” because their only options are contradictory and force them to make undesirable choices.

The term comes from the 1961 novel Catch-22 by Joseph Heller. In the book, an army psychiatrist explains to the protagonist, an army pilot, that any pilot who seeks a mental evaluation in an attempt to be excused from flying dangerous missions—a task that only pilots deemed mentally stable are permitted to do—is demonstrating his mental stability by doing so. This is because being concerned for your own safety is a rational concern, and by having this rational concern, a pilot proves his sanity and thus his suitability for flying dangerous missions.

The paradox, or catch-22, is that if a pilot isn’t concerned for his safety, he likely isn’t mentally stable enough to fly these missions.

Take a look at this real-life catch-22 example:

All three of these examples start with a claim, but the first two aren’t examples of circular reasoning. Rather, they assert subjective opinions as fact, then they claim these facts as evidence to support the statements that follow. The third example is a circular argument because it makes a claim, then it attempts to support that claim without offering logically sound evidence.

How to avoid using circular arguments in your writing

You should avoid making circular arguments in your academic and professional writing because a circular argument—like any logical fallacy—undermines your position. With creative and personal pieces, you have the freedom to be as illogical as you’d like to be because you aren’t analyzing or presenting data, defending a position, making an argument, or attempting to persuade your reader to take action.

Having a circular argument in your writing also tells readers that you don’t have a strong understanding of your topic. Whether this is the case or not, it’s something a circular argument communicates. This is why it’s important to carefully read your first draft after you finish writing it and as you make edits, and that you revise with an articulate, logically sound final version in mind. When you go back to proofread your last draft, double-check for logical fallacies and inconsistencies one last time before you submit your work.

Here’s how you do that: As you read your first draft, note all the claims you make. Then, note the evidence you provide for each of these claims. Can you support each claim with information from your sources? If you can’t support a claim in your writing, find evidence that supports it and work the evidence into your piece. Sometimes, this is as simple as rewording a passage to make the evidence clearer. In other cases, if you can’t support your claim with evidence, it may be a sign that it’s logically unsound.

How do circular arguments work?

Essentially, a circular argument makes a claim, and then it assumes certain evidence is true because it appears to support that claim.

What are circular arguments in writing?

Circular arguments follow the same structure in writing that they do in spoken conversation. When an arguer introduces a conclusion as proof that the evidence following it is true, they’re making a circular argument.

What is an example of a circular argument?