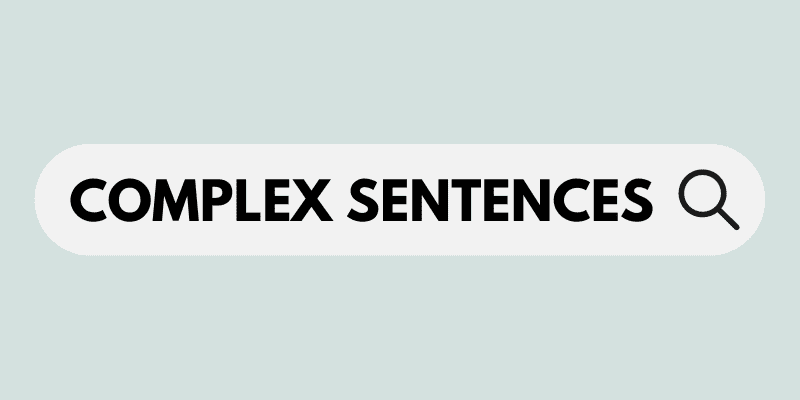 They are one of the four types of sentences according to structure. These complete sentences contain one independent clause and at least one dependent or subordinate clause.

Let’s have a quick refresher on clauses.

Dependent clauses or subordinating clauses cannot function as a standalone sentence. Despite their understandable ideas, they are only fragments or phrases.

Independent clauses are a type of clause that can stand on their own as a sentence. These entire ideas have a subject and predicate.

What is a Conditional Sentence?

These are one of the most common types of complex sentences that discuss hypothetical scenarios. These categories often have an if-and-then logic. Here are some examples:

How to Identify a Complex Sentence

But they can still be confusing because both types of clauses have a subject and a verb.

The biggest difference is the clauses they contain.

What Does a Complex Sentence Contain?

It has only one independent clause, and that’s it. So, if you see a statement with two clauses, they cannot be simple sentences.

Example: Her mom is a fighter. She battled cancer for four years.

In the statement above, two simple sentences show complete thoughts. These are:

These have simple grammar rules. You can quickly remember these guidelines as long as you know the difference between a dependent and independent clause.

Another rule when forming a complex sentence is always to include subordinating or complex conjunctions to link the dependent and independent clauses. A subordinating conjunction has either of the following functions:

Some people call subordinating conjunctions “heart words” because they transform two statements into one concise thought. Even if both have their own subjects and verbs, they can be joined together through these heart words.

The comma function is essential to put a pause in the middle of the statement. But despite the multiple times commas are essential, you shouldn’t use them if the dependent clause is the second clause. Here’s an example:

I cried, because I was happy.

You don’t need a comma in the statement above because the second clause, “because I was happy,” is dependent. Instead, you can say:

The second sentence above shows that you can use a comma if the complex sentence starts with the subordinate clause.

Learn how to use a comma after a fronted adverbial in your complex sentence. When the dependent clause is in front and serves as an adverb of time, place, or condition, it is acceptable to use a comma. Here are more examples:

How to Form a Complex Sentence With an Adjective Clause

An adjective clause is one of the three types of clauses that function as dependent clauses. This type of clause modifies a word or a group of words in another clause of a sentence. These clauses use subordinate conjunctions that, who, which, and whom. Here’s an example:

He’s the teacher who gave me good grades.

Forming a Complex Sentence with an Adverbial Clause

Adverbial clauses can start with conjunctions when, as, before, because, since, if, etc. These clauses modify an action, adjective, or another adverb in the sentence. Here’s an example:

I could not attend as I am ill.

This adverbial clause is a cause clause, with the dependent clause “as I am ill” modifying “could (not) attend.”

How to Form a Complex Sentence with a Noun Clause

Noun clauses are the last type of complex sentence clauses that function as one dependent clause. Here are some examples:

Punctuations and a comma combination can result in ever-longer statements. Even if your single sentence structure follows grammar rules, your primary thoughts may be unclear to your reader.

A run-on sentence occurs when the writer does not correctly connect two clauses in a complex statement. This writing error is the equivalent of the comma splice error in the compound and compound-complex sentences.

Don’t forget the rules on commas and subordinating conjunctions so you can avoid these mistakes.

Complex sentences share similarities with compound sentences, so don’t feel bad for mixing them up. Compound ones are a single sentence that contains two or more independent clauses.

Meanwhile, complex sentences are one of the types of sentences with an independent and a dependent clause.

The main tip for differentiating between the varied sentence structures is to check the conjunction. If it uses coordinating conjunctions (FANBOYS), it’s a compound sentence.

Learning the basic sentence structures will help you practice variety in your writing. Overusing one style of sentence can make you sound monotonous and boring.

One of the four basic sentence types is the complex sentence, which contains one dependent and one independent clause.