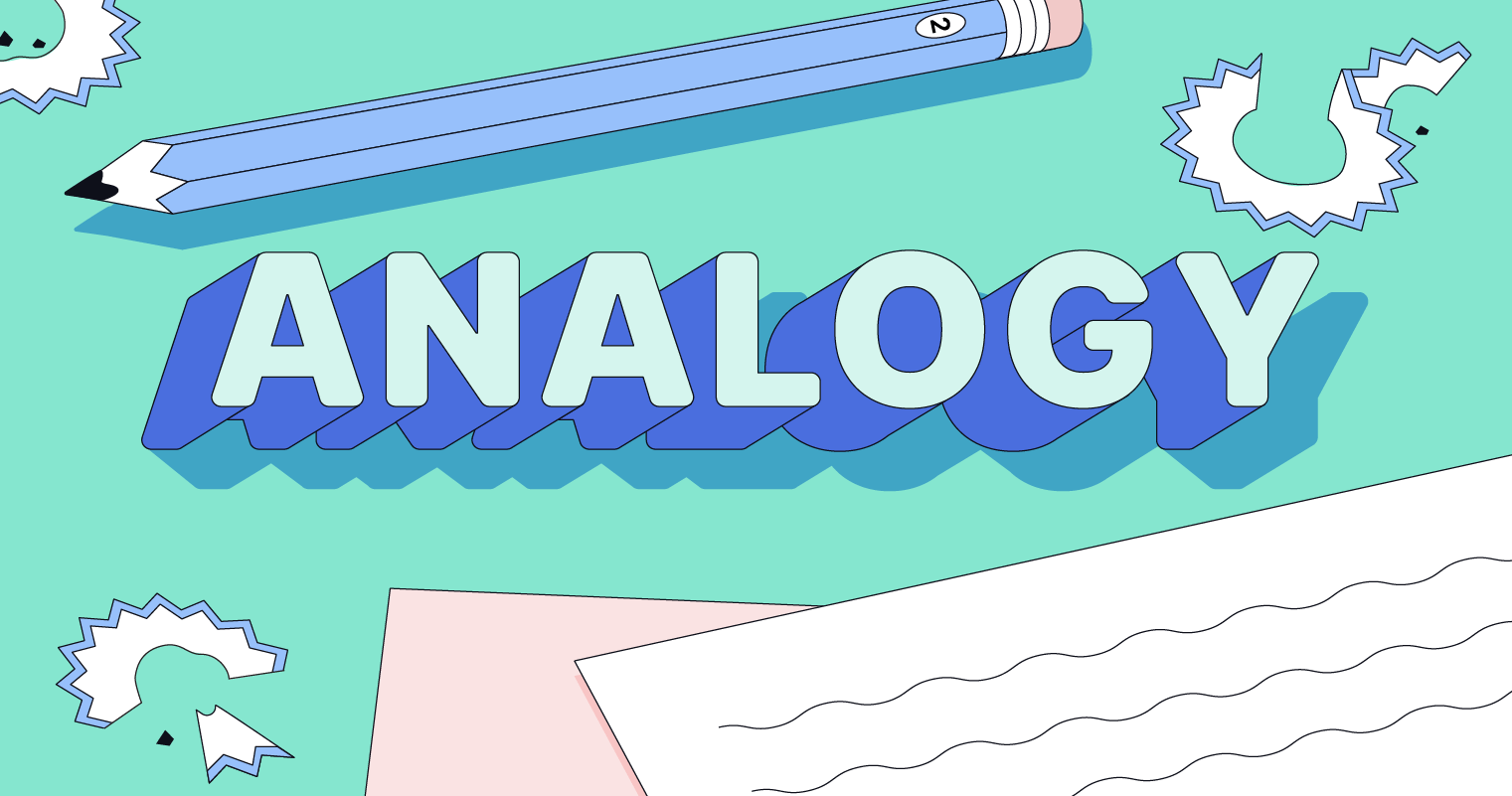 Analogy is a literary device that compares seemingly unrelated things to one another. For example, a common analogy used in middle school biology is “Mitochondria are the battery of the cell.” When a biology teacher calls mitochondria a battery, they are not giving a figurative description of microscopic Duracells scattered throughout the human body. They are conveying a message about mitochondria’s function: they power the cell the same way a battery powers a cell phone.

Similes and metaphors also use comparison to vividly express an idea. Analogy differs from these devices by pushing the comparison past pure description and using it as a means of explanation.

While analogies can create vivid imagery for a reader, they are best deployed to enhance someone’s understanding or to progress an argument.

The word analogy comes from the Greek word for “proportionality.” You might see analogies written as proportions, taking the form of “A is to B as C is to D.” “Up is to down as on is to off” is an analogy (though not a particularly profound one). This is an example of an identical relationship analogy. The relationship between up and down (they are opposites) is the same as the relationship between on and off.

Another type of analogy is a shared abstraction. Commonly found in writing and conversation alike, shared abstraction analogies rely on specific patterns or characteristics to explain meaning. An example is “Raising children requires the same dedication you would give to a garden. Nurture them, feed them, introduce them to both light and dark, and have patience; and soon you will see them grow into blooming wonders.” In this example, a somewhat abstract and complicated topic—raising children—is described through a comparison to the more straightforward work of tending a garden. Even people who have never raised children will begin to understand the care and complexity of the task thanks to the use of analogy.

Two other types of analogy are persuasive and literal. Persuasive analogies are provided to support an argument. Lawyers—professional arguers—will sometimes create hypothetical situations in order to help members of a jury better grasp the situation at hand. Setting up a hypothetical and then relating it to the case is an extended analogy—an argument supported by a comparison. Literal analogies create the opportunity to extrapolate. For example, if a new hair growth treatment shows a certain amount of success in mice, it can be extrapolated that it may have similar, analogous effects on humans.

How does an analogy work?

Analogy allows a writer to say something deep, complicated, or abstract without losing the reader. To return to the middle school biology example: a teacher could explain the function of mitochondria by detailing the chemical conversion process of oxidative phosphorylation, or they can call mitochondria batteries. Both explanations lead to the same conclusion—mitochondria power the cell—but one is easier to grasp and therefore easier to remember.

This is a common structure in analogy. Enhance the clarity of an unfamiliar thing by comparing it with a familiar one. Through that connection, the reader develops a greater understanding.

This is where analogy begins to diverge from simile and metaphor. While all three are literary devices that compare one thing to another, analogy takes the comparison a step further by using it for explanation. In other words: similes and metaphors show; analogies tell.

Another close relative of analogy is allusion, which is a reference to a well-known person, character, or place. Both analogy and allusion use a reader’s familiarity with a subject to deepen their understanding of another subject. However, good allusions don’t require explanation. For example, “going down the rabbit hole” is an allusion to Lewis Carroll’s Alice’s Adventures in Wonderland, but that doesn’t need to be explained when using it. However, with analogies, explanation is almost always the point.

When to use an analogy

A writer can use analogy in literature to give the reader a deeper understanding of a complicated or unfamiliar topic. Just because it is explanatory doesn’t mean it has to be dull. By employing figurative language, analogies create understanding while also leaving a vivid impression. In his novel Beatrice and Virgil, Yann Martel writes: “Just as music is noise that makes sense, a painting is colour that makes sense, so a story is life that makes sense.” The use of analogy here not only explains the relationship between living and storytelling, but it does so with expressive language that leaves the reader with a much more memorable sentence.

How to write an analogy

Analogy is an incredibly useful tool for explanation, and we often create analogies in everyday conversation without realizing it. If you want to use analogy in your writing to help convey a message, here are four helpful rules:

1
Make sure the imagery you use is familiar and easy to understand. Creating an overly complicated analogy defeats the purpose of using analogy for explanation.

2
Compare and contrast. When you have the two items you want to compare, think through as many of their similarities and differences as you can. You might realize even deeper connections between them that you hadn’t thought of yet. Alternatively, you might realize the differences are more prominent than the similarities and the analogy won’t work.

3
Think about your audience. If you are writing a personal essay you know your colleagues will read, you can assume your audience has a certain amount of familiarity with your interests. But if you’re writing for a general audience, you should simplify your analogy by including more universally familiar topics.

4
Make it obvious. Your reader should understand the connection immediately. If they have to pause to ponder what X has to do with Y, then the analogy has failed to do its job.

You’ll find analogies in all kinds of writing and speeches. Here are some famous examples of analogy:

“Reading poetry is like undressing before a bath. You don’t undress out of fear that your clothes will become wet. You undress because you want the water to touch you. You want to completely immerse yourself in the feeling of the water and to emerge anew.” ―Kamand Kojouri

“Truth, like gold, is to be obtained not by its growth, but by washing away from it all that is not gold.” ―Leo Tolstoy

“What gunpowder did for war the printing press has done for the mind.” —Wendell Phillips

And, of course, one of the most famous analogies in literature:

“What’s in a name? That which we call a rose, by any other word would smell as sweet. So Romeo would, were he not Romeo called.” —William Shakespeare

What is an analogy?

An analogy is a literary device that explains an unfamiliar or a complex topic by comparing it to a familiar topic.

How do analogies work?

Analogies rely on a reader’s familiarity with one subject in order to help them more deeply or vividly understand another subject. For example, you may have never raised children, but if a writer says that “raising children is like tending to a garden,” your brain will begin to form an impression of what raising children is like.

When should you use an analogy?

Writers should use analogy when they want to give the reader a deeper understanding of something complex or abstract. It can also be used to advance an argument or to surround a topic with imagery that will stick in a reader’s mind.