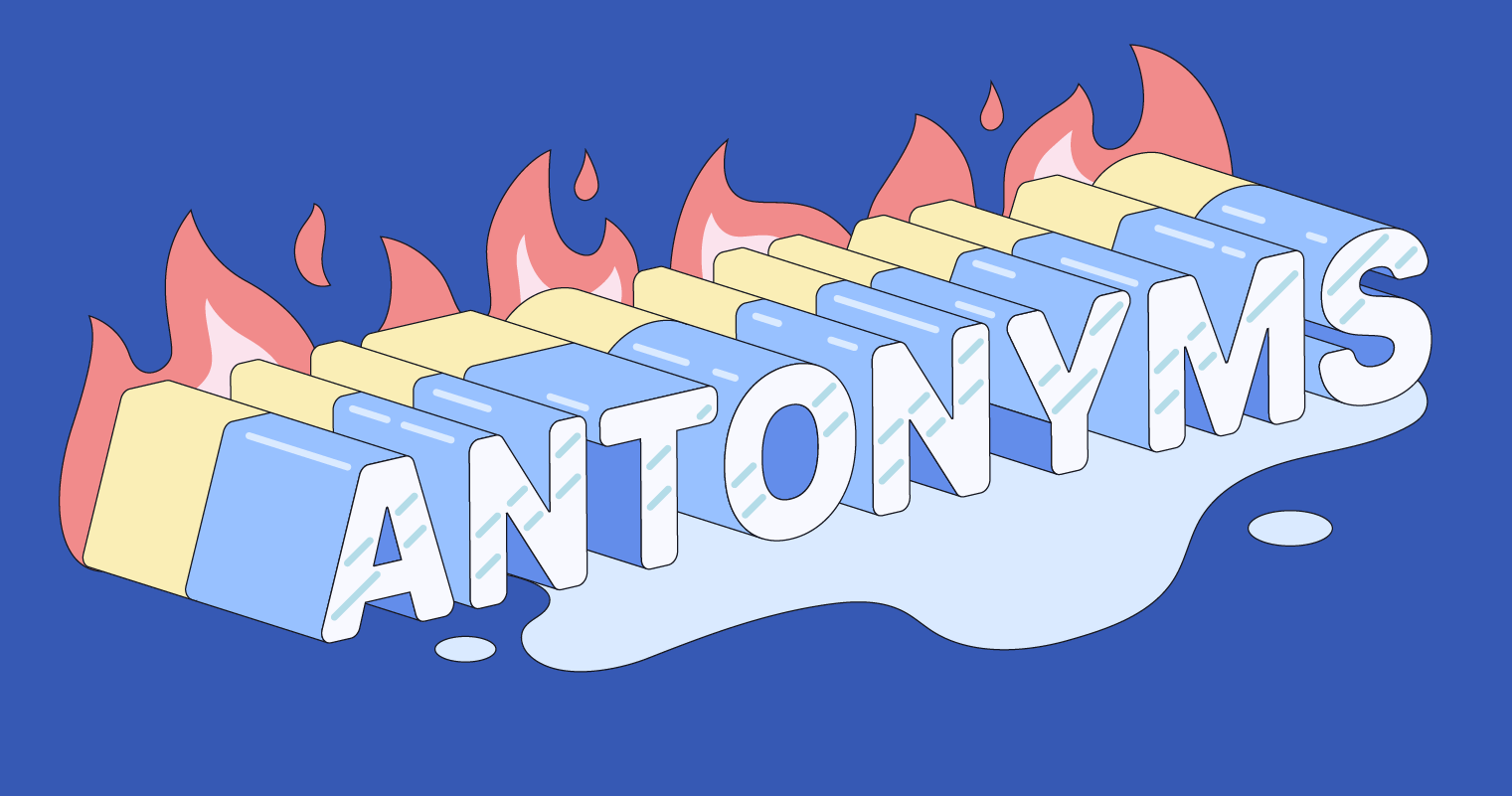 An antonym is a word that means the opposite of another word. For example, hot and cold are antonyms, as are good and bad. Antonyms can be all types of words: verbs, nouns, adjectives, adverbs, and even prepositions.

Knowing how to use antonyms can improve your writing and English skills, but some details need to be explained. Below we answer the question, What are antonyms? We go into full detail and explain the different types and when to use them.

What is an antonym?

Antonyms are closely related to synonyms, which are words that have identical meanings. While antonyms have opposite meanings, synonyms have the same meaning.

Don’t overthink it, but the words synonym and antonym are actually antonyms!

One of the most common contronym examples is dust. As a verb, dust can mean:

Essentially, the word dust means both to “add dust” and “remove dust.” This contrast in definitions makes it a contronym. You can find more examples in our article on verb contronyms.

What’s the purpose of antonyms?

Antonyms play an important role in writing by making your words more effective. Placing opposites together highlights their differences and makes the individual words stronger. Specifically, you can use the power of opposites in three ways.

Antonyms are great for comparing two separate things and drawing attention to what makes them different. If you’re writing a research paper that compares two topics, using pairs of antonyms can better communicate what sets them apart.

Sometimes the best way to describe something is to explain what it isn’t. Using antonyms with a negative can add new dimensions to your descriptions and improve your writing’s word choice.

For example, you might describe someone who is arrogant as “not modest” or “not humble.” Because modest and humble are antonyms of arrogant, you’re saying the same thing. However, using the antonyms draws attention to the fact that the person chooses not to be modest or humble, which adds a little more characterization than simply calling them “arrogant.”

In this way, antonyms can enhance your persuasive writing by strengthening your descriptive words and challenging your reader’s expectations.

Antithesis is a literary device that directly harnesses the power of opposites by placing them next to or near each other. As mentioned above, antonyms draw attention to what makes things different, making each word seem stronger. Antithesis takes this to the next level by putting antonyms together. Always look for opportunities to use antithesis when you revise your writing.

One of the most famous examples of antithesis is Neil Armstrong’s real-life quote when landing on the moon:

That’s one small step for man, one giant leap for mankind.

There are two different pairs of antonyms here: small and giant, and step and leap. By putting the opposite concepts of “small step” and “giant leap” together in the same sentence, his statement makes each of them seem more significant. If Neil’s first words on the moon were “I took a small step” and nothing more, his quote wouldn’t be nearly as popular!

Also known as binary antonyms or contradictory antonyms, complementary antonyms are word pairs where the positive use of one means the negative use of the other. In other words, they have an either-or relationship: Something can be either one or the other but never both at the same time.

Also known as converse antonyms, relational antonyms play opposite roles in a mutual relationship. For example, teacher and student are relational antonyms: Neither can exist without the other, and yet their roles are completely different.

In English, antonyms are often used with prefixes, small syllables of around one to three letters that attach to the beginnings of words to change their meaning. There are a few prefixes that reverse a word’s meaning, turning it into its opposite—perfect for antonyms!

Be careful when using prefixes: Not every word can take a prefix, so you can’t add them wherever you want. You just have to familiarize yourself with the common prefixed words in English until you memorize the correct terms. Also, pay attention to spelling, as sometimes a letter gets doubled to assist the pronunciation.

Here are some common prefixes used with antonym pairs, along with their examples. Each of these prefixes essentially changes a word’s meaning to its opposite.

Antonyms are words with opposite meanings, like hot and cold, good and bad, and happy and sad.

When should antonyms be used?

Antonyms are best used in comparisons to draw attention to what separates two opposing things. By pointing out these differences, antonym pairs can better communicate what sets each apart from the other.

What are the different kinds of antonyms?