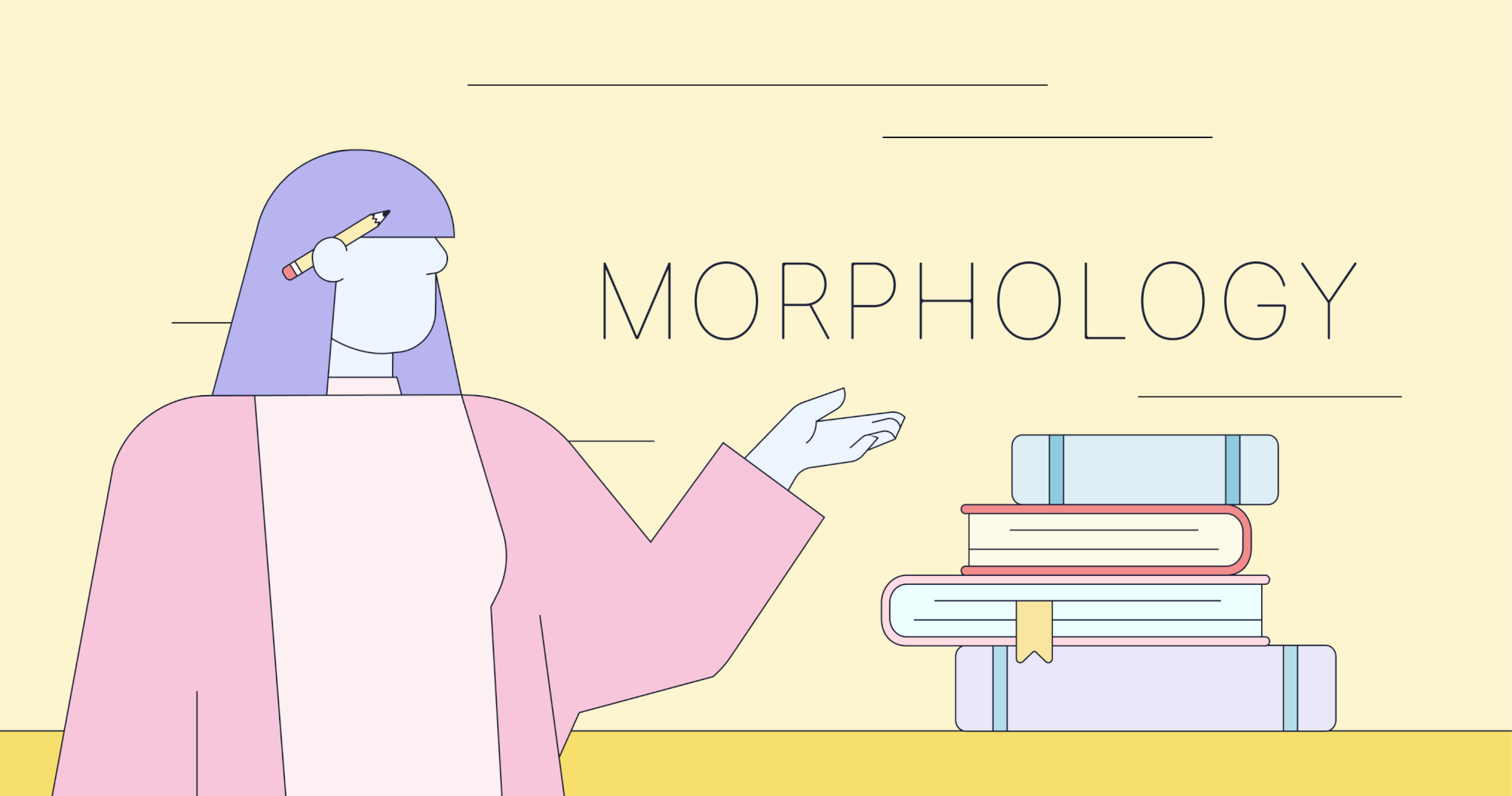 Morphology is the study of how parts of words, called morphemes, create different meanings by combining with each other or standing alone. For example, if you take the morpheme cookie and add the suffix –s, you create a new word—cookies, a plural form with a slightly different meaning than the singular form.

Morphology is a crucial part of lexicology, the study of words and their meanings, as well as etymology, the study of how words originate and evolve. But even if you’re not a linguist, morphological analysis is still a great tool for improving your English. Below we explain everything you need to know, starting with the question, “What is morphology?”

What is morphology in writing?

Morphology deals with parts of words called morphemes. Morphological analysis looks at how morphemes can be combined or separated to make different words with different meanings.

The most common examples are plural nouns. Usually a noun’s root word alone means the singular version; for example, for the morpheme cat, the root word cat means “one cat.” To talk about two or more cats, we take the morpheme cat and add an –s to the end; this is because spelling plurals with –s or –es is common in English. Understanding the relationship between cat, cats, and the suffix –s is all part of morphology.

If you’ve never heard of morphology before, don’t worry—most people haven’t. Like lexicology and etymology, morphology is an academic topic studied mainly by linguists and other language researchers. Still, understanding morphological analysis can help anyone communicate more effectively.

For one thing, morphology can improve your reading comprehension by helping you understand the meanings of words you’ve never seen before. Morphology can also answer a lot of frustrating questions, like why some words are spelled weirdly or why irregular words don’t follow the normal rules.

Moreover, studying morphology introduces you to new morphemes, which expands your vocabulary and teaches you brand-new words. This, along with other techniques from our writing guide, can only improve your writing.

A morpheme is the smallest part of a word that still has a meaning. For example, the word tree is a morpheme, but if you shorten it to tr or ee, it loses all meaning.

There are two types of morphemes:

1
Free morphemes are morphemes that can exist independently as individual words. These are typically root or base words, like the free morpheme comfort.

2
Bound morphemes are morphemes that cannot exist independently and must be used together with a base word. These are typically affixes—prefixes or suffixes—like the bound morphemes un- and –able in the word uncomfortable.

Let’s look at another morpheme example: deconstruction. In this word, there are three morphemes: construct, de-, and –ion. Only construct is a free morpheme; on its own it is still a complete word. However, de– and –ion are bound morphemes; neither is a complete word that makes sense when used alone.

Morphemes are often confused with syllables because both are used to break up words into smaller parts. However, the two are not related.

However, morphemes aren’t based on sound, so a single morpheme can have more than one syllable. For example, the entire word caterpillar is still just one morpheme, even though it’s four syllables.

What are free morphemes?

Free morphemes are any morphemes that work on their own, including individual words. However, free morphemes don’t always need to be alone; they can also be combined with bound morphemes to make new and more advanced words. In this sense, free morphemes are usually the root or base words in complex constructions. That’s just one of the many reasons why it’s helpful to learn roots.

What are bound morphemes?

Because free morphemes and bound morphemes are often combined, it’s important to understand their differences. Let’s look at an example:

Independent has three morphemes, but only one of them is a free morpheme: depend. You can use this free morpheme by itself with no additions.

My dog and I depend on each other.

The other two morphemes in independent are in- and -ent, and they’re both bound morphemes. The prefix in– is a negative affix that negates the meaning of the base word; so if depend means “to need something,” the prefix in- changes the meaning to “does not need something.” The suffix -ent is a grammatical morpheme used to turn a word into an adjective or a noun.

Put all those morphemes together, and you have a brand new word, independent. This word has a completely different meaning than its base word, depend, and is even a different part of speech (depend is a verb, while independent is an adjective).

My independent cat can survive happily without me.

Affixes refer to prefixes and suffixes, which are small bound morphemes that change the meaning of the base words they attach to. However, because they’re bound morphemes, they cannot exist on their own and must combine with base words.

Prefixes are affixes that come at the beginning of a word. One of the most common prefixes is un-, a negative prefix that negates the meaning of the base word. For example, if you add the prefix un– to the base word do, it means “to cancel or reverse an action.”

I spent all night undoing the intern’s mistakes.

Suffixes, on the other hand, are affixes that come at the end of a word. In addition to making plural nouns, suffixes are often used for grammar, such as changing the type of word. For example, you can use the suffix -ness to turn an adjective into a noun—for example,  emptiness.

My plate is empty, but there is no emptiness in my stomach.

Suffixes also have a vital role in verb conjugation, helping the verb to match the number, gender, and person of the subject and also creating different verb tenses. Notice how the suffixes –s and –ed are used with the base word play in the examples below:

We play on the swings.

She plays on the swings.

Yesterday, we played on the swings.

Morphology in English vs. other languages

A fusional language is one that uses a single morpheme to represent multiple grammatical functions. For example, in Spanish one suffix can turn a word singular, masculine, and past tense; all of those functions are fused into a single morpheme.

In contrast to a fusional language, in an agglutinative language individual morphemes represent only a single function. These languages tend to be simpler and easier to understand since each morpheme has only one meaning.

What is morphology in writing?

Morphology is the study of how different parts of words combine or stand alone to change the word’s meaning. These parts of words are called morphemes.

What are the different kinds of morphemes?

Why is learning morphology important?