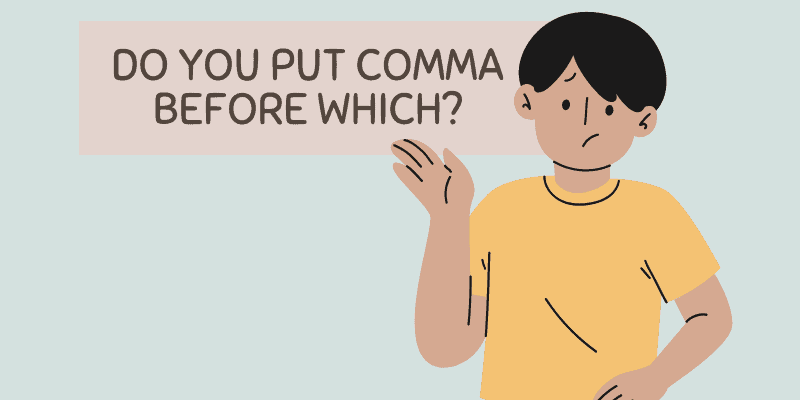 Rules about commas can be confusing, especially when used with pronouns and adjectives. The word which is one such example that, although not commonly used, can create some questions concerning proper punctuation.

Does which need a comma? It depends on how you are using it.

I find the best way to introduce the use of commas in relation to a word is to explain to my students when and how to use a word in the first place when writing. Let’s review how the word which should be used and when, or when not, to use a comma with it.

How to Use the Word Which

The word which serves as either a relative or interrogative pronoun and will always refer to an animal or thing. It also may serve as an adjective within a sentence. Knowing this use is pertinent information for writers when you want to ensure your audience understands you.

An interrogative pronoun is used to introduce direct questions, which, of course, always ends in a question mark.

When used as an adjective, the word which serves as an adjective clause to identify or provide additional information about the subject of the related independent clause.

Do You Put a Comma Before Which?

There is only one instance in which you use a comma before the word which (see what I did there?).

If you apply the following rules, you should always be able to recognize when to use a comma before which.

Rule #1: ALWAYS use a comma before which when it introduces a nonrestrictive clause

A nonrestrictive phrase adds detail to a sentence, but it is considered non-essential information and unnecessary for the overall understanding of the sentence.

When a nonrestrictive phrase begins with the word which, comma usage is necessary to indicate the phrase is not required.

For example, consider the following sentence:

It becomes with the addition of a nonrestrictive phrase:

Adding a nonrestrictive phrase adds detail about the bike to the reader, but if removed, it doesn’t take away from the sentence’s overall meaning: that the new bike has a flat tire.

The phrase “only ride to school” modifies the fact that the bike is Xavier’s. Without the phrase, the overall meaning of the sentence is lost.

Rule #2: NEVER use a comma before which when it is part of a preposition phrase.

A prepositional phrase is a preposition followed by one or more nouns or pronouns that serve as the object of the preposition. Prepositions show direction, place, time, location, and relationships or serve to introduce an object. They include words such as at, in, of, an, and to.

If the word which is part of a prepositional phrase, no comma is needed. This is a common comma placement mistake, which experienced writers know to avoid.

Can You Use a Semicolon Instead of a Comma?

In short, no, never use a semicolon. A semicolon is used to replace a conjunction between related independent clauses. Semicolons do not replace commas and do not follow the rules spelled out above.

Can You Use a Comma After Which?

A comma only is used before the word which, not after. When used with a nonrestrictive clause that begins with which, you will use a pair of commas both before and after the end of the clause but never after the word which itself.

Using Commas Before Which in Sentences

Here are some more examples of sentences that include when to use a comma before which. These highlight the placement of commas concerning nonrestrictive phrases as well.

There is only one insurance when you use a comma before the word which, and that is when which is used to introduce a nonrestrictive phrase. A nonrestrictive phrase is a phrase that is not necessary to the overall understanding of the sentence. It works to simply provide added detail to the subject.

Which can serve as either a pronoun or adjective in a sentence, but a comma is only used when it functions as a relative pronoun used to introduce a dependent clause.